I was here on Saturday:

… it was the last game of Rich and I’s ticket plan, and it was Mike Piazza bobblehead day. So I knew there would be somewhat of a crowd for this game between the 40-87 Houston Astros and the 58-69 New York Mets… a game with huge implications.

Huge implications on my snagging record, that is. I needed one Astros 50th Anniversary Commemorative ball to complete the 6-ball set this year (Boston, Baltimore, LA Dodgers, Miami, NY Mets, Houston). I knew it would be tough to get, being a day game after a night game, plus an ominous comment from Mateo Fischer :

I was, however, excited to see this:

Looking around, I was the only one around wearing Astros gear. If there was a commemorative to have, I was confident I’d get it. I headed over here:

…and got Wilton Lopez (player to the right of the coach in the shorts) to throw me my first ball of the day. I almost didn’t get it. He threw it short, and it tipped off my glove. He was cool about it and threw me another ball on target and I even got a wave after (Neither ball was a commemorative). I then saw a ball here in front of the tarp:

…but didn’t bother going for it once I saw it was a regular ball. I switched it up to try and get a home run up here:

…but long story short, most of the Astros were attempting to be cool  and didn’t really throw anything up, and the Astros only hit about 4 total homers into the crowd. I did come close to one though.

I decided to try my luck over by the Astros dugout:

…Interim manager Tony DeFrancesco walked over and I asked him for an anniversary ball. He told me he didn’t have any with him, and hadn’t seen one in a while.

Later, Jose Altuve came out to pose for a baseball card: 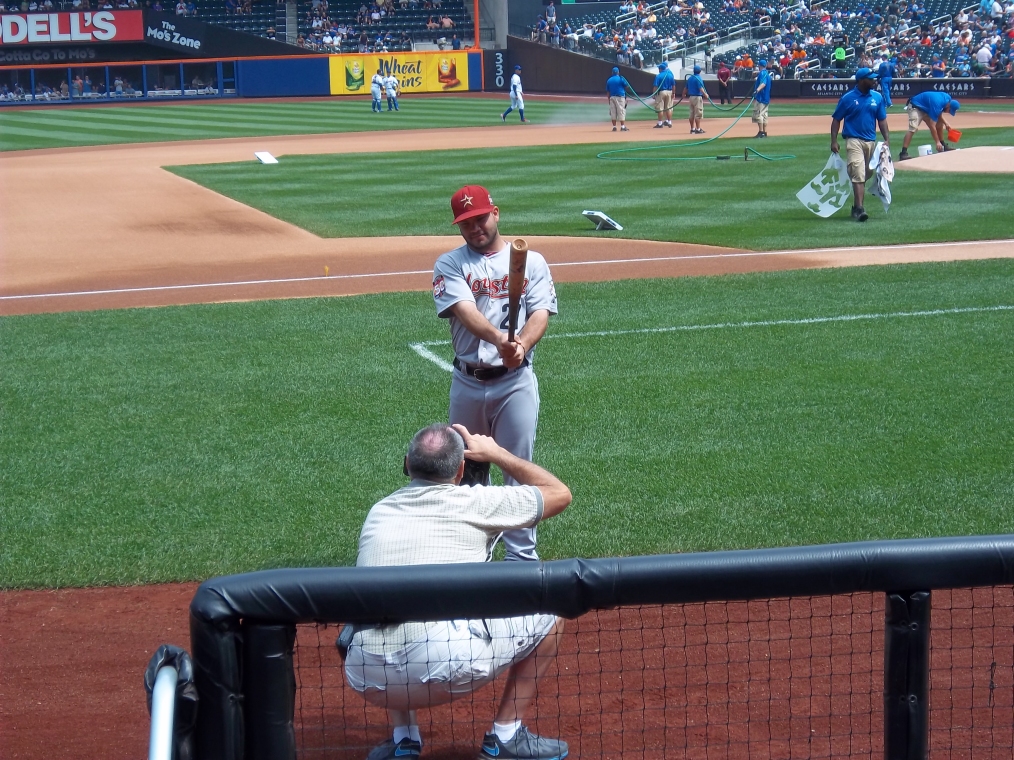 …and he later told me the same thing. I tried again with Fernando Martinez and Brandon Barnes: 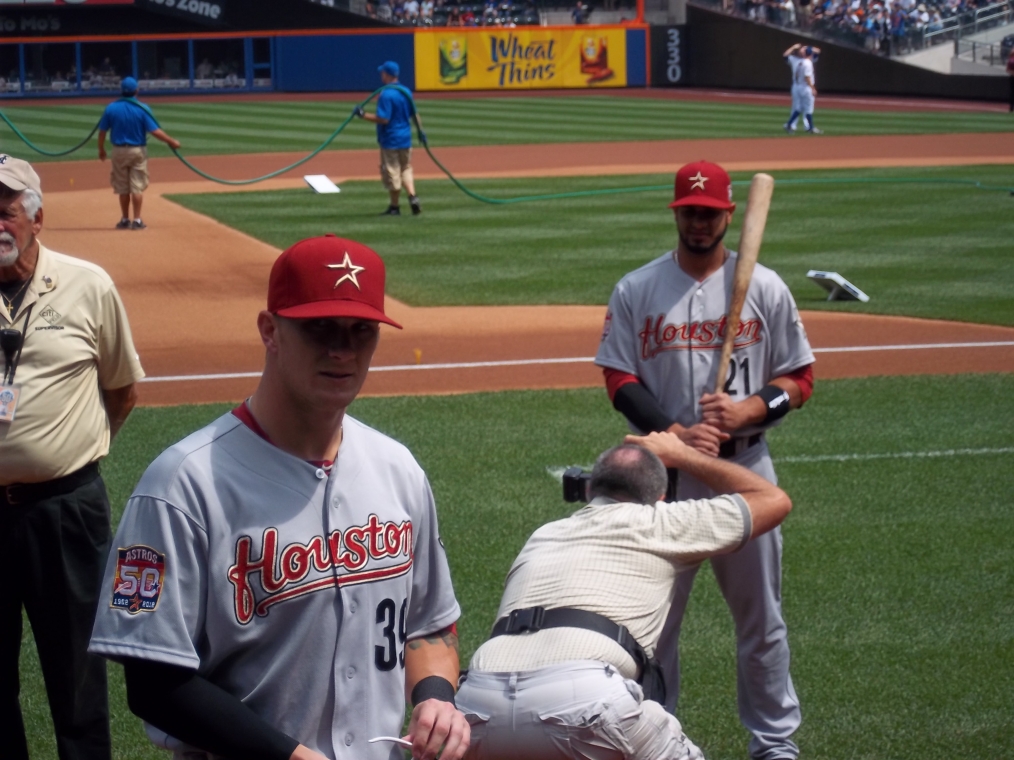 …and they said that they don’t bring the Astros balls with them on the road.

I knew this wasn’t true, because I have seen Zack Hample get one in Philadelphia earlier this season. So based off of this info, I refused to accept it.

I did, however, snag some of this from Lucas Harrell:

… I didn’t ask for the gum, he was throwing bags of seeds and gum up for everyone. It was pretty cool.

I then got denied by ten… count ’em, TEN Astros after the national anthem: 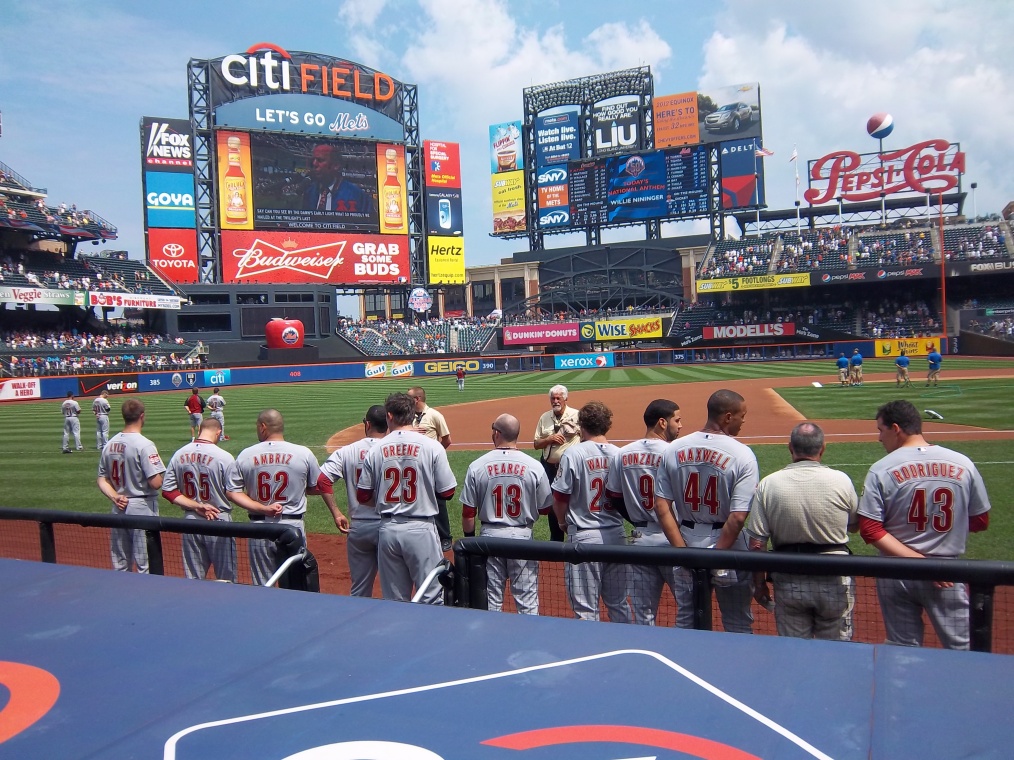 …I then got bluntly kicked out of the section. I did our usual hang out in center field-thing we usually do, occasionally heading down to the Astros bullpen to see if anything was up. I got the attention of bullpen catcher Javier Bracamonte who actually took the time to look through the ball bag for a commemorative, but only sifted through about 4 or 5 until saying sorry and heading back to the bench. I went down again later, and found Rhiner Cruz stretching:

… I asked him to come over and look for me, and he did try and look, but said they didn’t have any.But he did toss me this:

… I’m not going to complain.

Manny Acosta came out back by the fence and I said hi. I wasn’t about to bother him or ask him for a ball. It was weird just sitting there with him for about an inning:

Later the Astros bullpen coach Craig Bjornsen told me he didn’t have any anniversary balls because the team doesn’t travel with them.

What am I supposed to do, travel to Houston now? Go back to Citi tomorrow in hopes that this isn’t true? For sure not. So much for completing the set.

I set my sights on an umpires ball so I sat here behind two Met fans with clear taste for great pitching:

Here was my actual view:

… Frank Francisco pitched a 1-2-3 9th, and then home plate umpire Chad Fairchild walked past everyone into the locker rooms. Goodbye Citi Field.