It was game day, and here’s how it started:

I grabbed the Metro North to Yankee Stadium for the DBacks and Yankees. It was my first Yankee game of the year, and I was interested to see how the security was for the game. I kept hearing stories and rumors about how ridiculous it’s gotten, but I was interested to see for myself. When I got off, I noticed the Yankees had put up a tribute for the victims of the Boston Marathon tragedy:

Classy move by the Yanks. I headed around to Gate 2, and I was aiming to be the first one in line. And I was:

After about a half hour or so, I came across Zack Hample and we hung out until the gate opened. He’s taking part in this charity fundraising through BIGS Sunflower Seeds. They sent him a big bucket of them to try, and I was lucky enough to get a sample from his fist ever bag:

Pardon my lack of excitement. I’ve just been really tired and out of it lately. I’m not sure why. Eventually, the gates opened, yet Zack got to the left field seats before me. I don’t know what my deal is when I enter the stadium, I’m always fumbling with my bag, or ticket, or glove. I have to be better. Anyway…

I ran to left and found myself in front of David Robertson, and some other player I couldn’t identify. A few balls came to him, but he wasn’t tossing much up. There were no home runs getting hit to my area either. A very dull BP, if you ask me. I was disappointed because I had plenty of aisle space, but no reason to run in it:

You can see Zack in the picture next to the “ZooYork” sign. I was tempted to run to right field, but A) the Yanks weren’t hitting anything over there, and B) with only 45 minutes until I got kicked out of the section, it wasn’t worth it to run over. After a while, another group of players wound up in front of me:

And I got David Phelps to toss me ball #1 on the day:

Cool. There was about 20 more minutes of lifeless BP from the Yanks, so after they ran off I headed over to the Arizona dugout:

Now, take a look to the left. See #5? That’s Steve Sax.I asked him if I could have his ball when he was done, and he said no. Later on, he ignored kids and everyone else and fungoed balls from the outfield to the infield. Lame. Since security sucks, I got kicked out of the field seats and ran up to here:

I was hoping a lefty on the DBacks (Chavez, Goldschmidt) would pop one up to me, but nothing happened. I saw Zack catch a few just feet from my grasp, however. BP ended, and I was on 1 ball. I headed over here for the “Harkey”:

… and he threw them all into the bleachers. So, I headed over to the Arizona bullpen:

and the DBacks did a lot of talking but no tossing. People were too busy pissing them off by telling them they sucked so they didn’t bother to listen to me when I called their names.

During the game, I was bored so I headed up to the highest spot of the stadium:

I hung out there  for a while, and just kind of chilled out. It was nice to relax. After about an inning or so, I headed down to the standing room area by home plate:

The Yankees came back late with a go-ahead Travis Hafner pinch hit home run in the 8th, and when I managed to sneak my way down by the dugout after the game:

and I got Brad Ziegler to toss me my 2nd and final ball of the night. 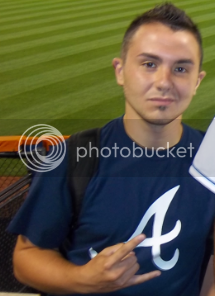