I got to Yankee Stadium around 4 p.m. When I got there, I threw on my ipod, got in line, and was graced with the presence of people like this:

…yeah. Anyway, I was there for a few more minutes when I ran into this guy:

… and then he hooked me up with some Frank’s Red Hot (which I LOVE) sunflower seeds. He’s doing a whole thing with BIGS Seeds for charity, and you can check it out here. That also explains why he’s decked out in BIGS gear. When the stadium opened, I decided to head to the 2nd deck in right field. Nobody usually heads up there first, so when I went up there to start, here was my view: 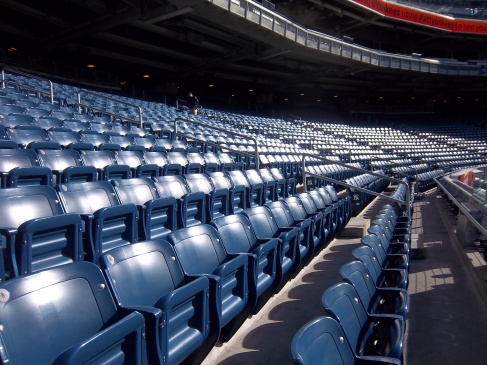 There were no Easter eggs around, so I just waited. And waited. Here’s what the Yankees were up to: 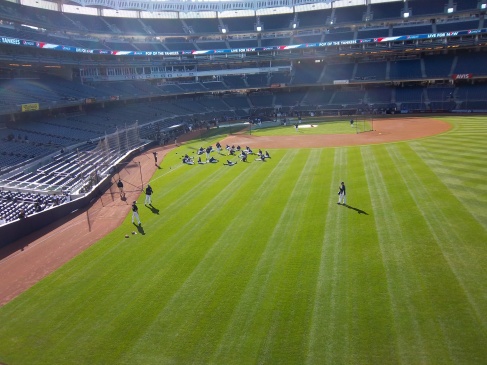 They stretched for a long time, and I felt like I was wasting my time. I decided to head down here after a few minutes to try for a toss-up:

And after a few minutes, I got Boone Logan to toss me my first ball of the day. I was also competing with Zack, Greg Barasch, and Ben Weil, to name a few. And, as luck would have it, the area I was just stationed in in the 2nd deck, proceeded to get 7 home runs hit up there by Travis Hafner and Lyle Overbay.

I had my eyes on this guy:

The guy I’m speaking of is #34, Vidal Nuno. I heard his story on TV the night before and how he almost quit baseball for a number of reasons, and toiled in the independent leagues, but stuck with it until finally making his Major League debut the night before. I wanted to tell him how I thought it was great hearing his story, but someone beat me to it and got a ball from him (I didn’t want a ball, I just wanted to talk). So I didn’t think Nuno would think I was being genuine, so I didn’t bother. Later, I moved to Left Field and it was the deadest BP I’ve ever been a part of. Anywhere. Minors, Yankee Stadium, you name it. So I was bored and took a panoramic photo:

Now, the reason I chose to go to this game is because the Astros are using commemorative balls this season. I made my way over to the Astros bullpen, where a few guys were practicing some catcher drills. Why was this important? Well, they dumped the entire bag out so I looked for stampings:

Zack was up in the bleachers and told me that none of the balls had any markings on them. The Astros were the only team I didn’t get a commemorative ball from the year before, and it looked like I wasn’t gonna get one this time. Oh, and did I mention that the Astros didn’t come out for batting practice? Same for the night before. Seems to me that a team that is 8-22 and in last place would…. you know, take batting practice. But what do I know, right? Shortly thereafter, Phil Humber and Jason Castro came out to toss:

… I was the only fan in Astros gear, plus it was quiet at the moment, and they proceeded to ignore me. Humber is 0-6 with an ERA north of 7, so you think he would be as endearing as possible for fans. I’ve heard from other people that the Astros weren’t really fan friendly, and I noticed this last year when I saw them on 8/25/12 at Citi Field. He went in to the bullpen, and I got this  good picture of him:

and nothing. I headed around to the 3rd base line for a toss up, but the players couldn’t see me.Therefore, I missed out on trying for a “Harkey.” I moved back to the bullpen and talked to bullpen catcher Javier Bracamonte. He’s a really cool dude if you get a chance to talk to him. Here he is:

I asked Bracamonte if he could hook me up and I got the fateful answer I got from him at Citi last year:

“We don’t take those on the road.” So that was that. Money and time wasted! Huzzah. As for the game, here were my seats: 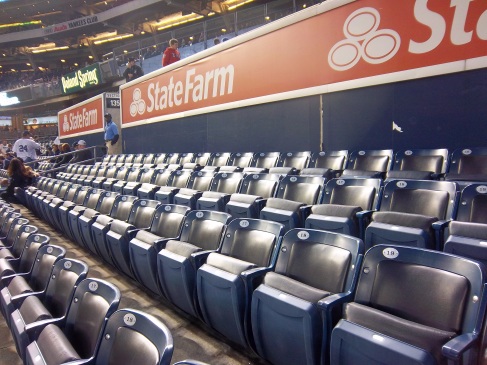 IT stayed like that all night. Just one homer needed to go my way and it was mine. Of course, the anemic lineups of the Astros and injury-riddled, lefty heavy Yankees lineups weren’t in my favor. My only chance was when Astro Chris Carter came up to hit. And his 3rd time up, he homered… but to Right Field. I’ll get my chance someday. I mean honestly though, here’s how it looked in the 9th:

Sigh. Mariano Rivera then came in and shut the Astros down 1-2-3 for the save.

I also checked the ball under a UV light, but there was nothing there.