So, as you may have noticed from my last post, I had a lot of traveling to do today. I woke up with Mateo around 8 am, got some gas, and headed down to NYC. Mateo was going to the Futures Game, but was stopping off at the MLB Fan Cave since they were doing tours (which doesn’t usually happen). I wanted to really go, but I didn’t want to have to miss BP for it. So, I dropped him off in Manhattan and drove across town until I found myself here: 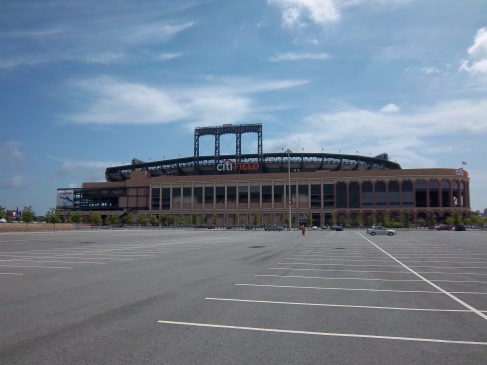 In my normal parking spot there was a lot of All-Star Game tents, etc., and even a makeshift Modell’s store: 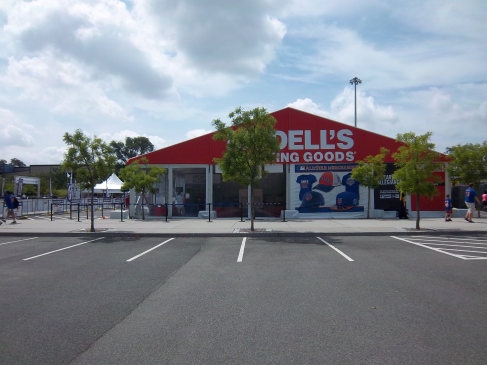 I figured I’d check that out later. I was more concerned with getting on line to be first inside. There were conflicting reports that all gates were opening at noon, then only some, then all again – it was annoying. When I got over to the left field gate though: 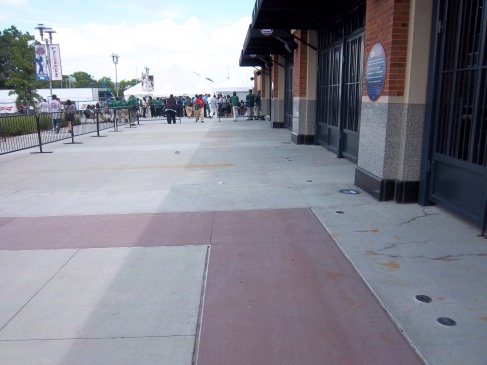 It was nice and empty. The left field gate gave me the quickest chance to get to the left field seats, and it was confirmed that the gates were opening at noon. I forgot to mention that New York City was in it’s first real heat wave of the summer, as temperatures were in the low 100’s pregame. I could feel myself cooking on the pavement. But hey, I chose to be there. Eventually, it was time to run inside, and as luck (especially mine) would have it, I was the first one to the LF seats, but this was going on: 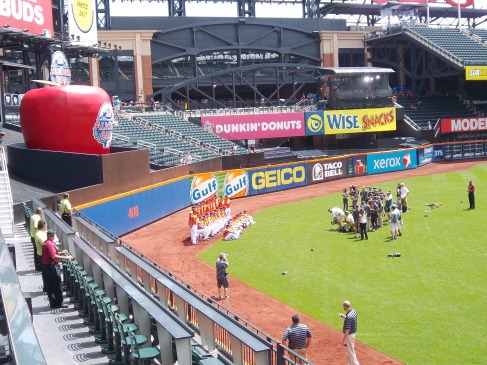 Of course, I was alone for a solid 10 minutes where my view looked – uncontested – like this: 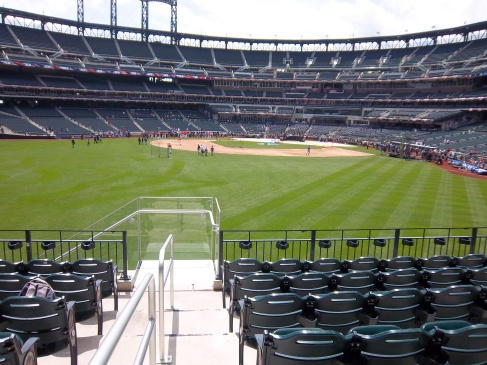 And after the 10 minutes in the same spot: 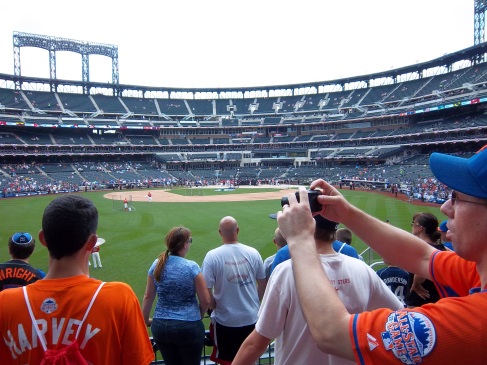 Yyyyyyyyyyyyup. Not only was it crowded, but it was filled with the most obnoxious fans I’ve ever seen. You know the type. Loud, rude, shoving, mispronouncing other players names to the point where you piss them off and then they just ignore everyone, and pushing. It’s just a baseball people.

I wass more mad because I actually studied the roster, got up early, prepared, and was first inside and I was still shutout. This one incredibly obnoxious putz (lack of a better word) was already on the board with 3, and I felt like pushing him over the Party City Deck railing. I don’t normally feel this way, but he was really pissing me off. To my right was a girl no more than 10 years old with her father who was doing wind sprints back and forth through the aisles each time a ball was hit. Last time I checked in on them, they had 7 on the day.

What bothered me more was that most of the balls were All-Star and Home Run derby Balls. News of this was spreading quickly, which made the crowds even more rabid. It was so annoying, for a Futures Game. I didn’t want to imagine what’d it’d be like for the actual events.

I tried a few different spots. I tried deep left center, down the line, center, lower right, and even the exhausting run to the Pepsi Porch. I’d like to think I’m in good shape, but the heat was so oppressive and the air was so heavy I was drenched in sweat by the time I got up there. Of course, when I did, everyone ignored me even though I knew their names and everyone else yelled UP HERE or OVER HERE. It was just one of those days.

It was almost the end of BP. There was 5 minutes left, and I was up on the  Pepsi Porch. I needed to be down in left for my trick that I do to get down low, and I didn’t think I’d make it. If I wanted a game ball, I’d need to go now. I even contemplated going home. But something was telling me to go to left instead.

I ran down back to deep left center, and wouldn’t you know it – a ball slammed into the seats to my left. Someone was reaching for it, and it was all mine. I kid you not, very next pitch – flew right to me and I made the easiest, one handed, underhanded catch of my life. I have no idea who hit it though.

And just like that, I had 2 on the day. Here they are: 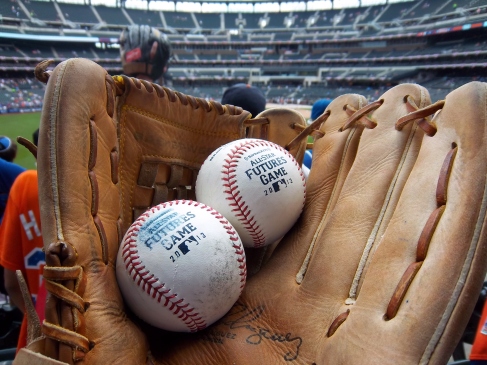 Sexy. I also happened to see Ben Weil, who was empty for the day, and snagged the literal last homer hit into the seat before BP ended, and he was on the board. I quickly made my way over to foul territory before all the players were off the field, and sat here: 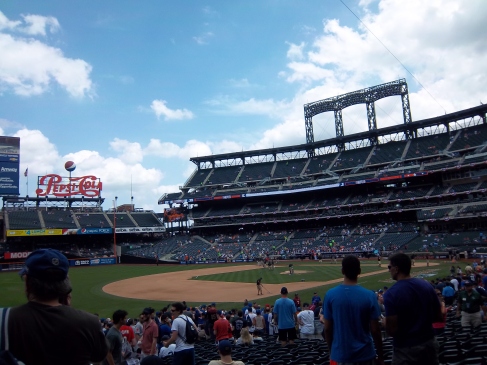 I was so hot and exhausted from running as fast as I could in the heat that I just kind of sat. And stared at nothing. I wanted to take my shirt off, but felt I’d get in trouble for it. I was so hot I succumbed to Citi Field’s prices and bought two crappy Aquafinas for 10 bucks and downed them quick. Eventually I cooled off, and it was game time: 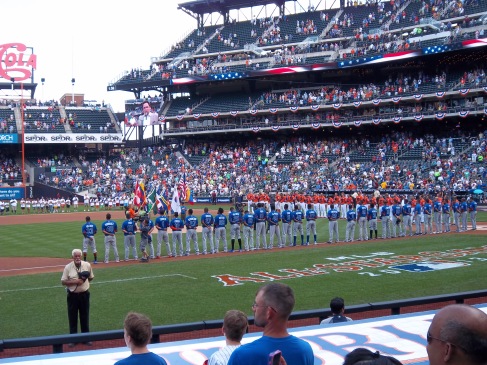 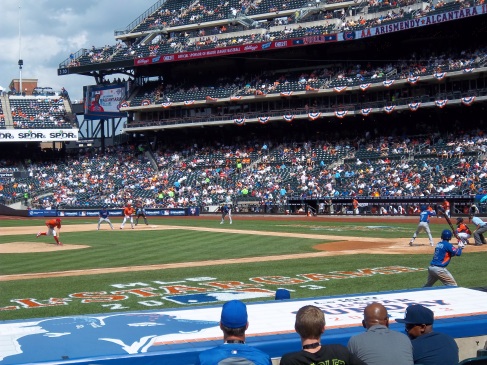 Around the 7th inning, I got coach Steve Scarsone to toss me the 3rd out/warmup ball. He’s currently the coach of the AAA Sacramento River Cats, the affiliate for the Oakland A’s. Here is that ball: 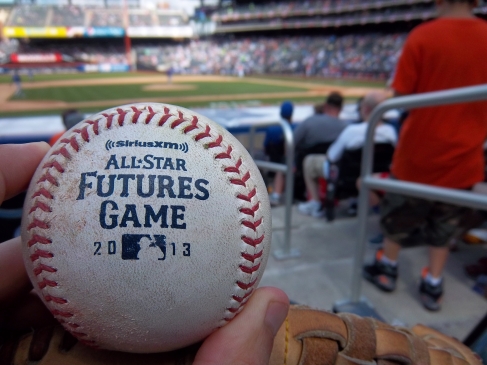 After a while, I met up with and sat with Mateo and Ben since I decided I was done snagging for the day, and hung out until the game ended. The U.S. won, 4-2. Arizona Diamondbacks prospect Matt Davidson was named MVP. Afterwards, it was time for the Celebrity Game: 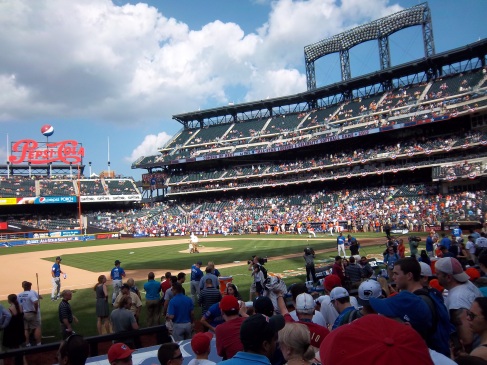 It was nice to see Bernie Williams go yard. I left a little early, as well. 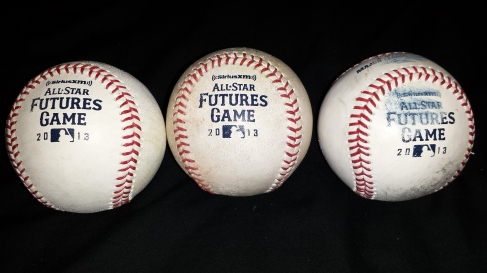