Day 5 of the crazy baseball weekend landed me in Scranton, Pennsylvania to see the Lehigh Valley Iron Pigs take on the Scranton-Wilkes Barre RailRiders (phew, that’s a mouthful) at the newly renovated PNC Field (not to be confused with PNC Park in Pittsburgh). I’d been trying to get to a game out here, partly because my cousin lives there and he’s been wanting to get to a game with me, and also because there was a faint chance that the RailRiders were using Inaugural Season commemorative balls. They used to be called the Yankees, but changed their name over the winter. Previously, you were able to walk around the entire perimeter of the stadium and look for balls and wait for homers in BP, so I’d have to see how it was after the renovations. We got there fairly early: 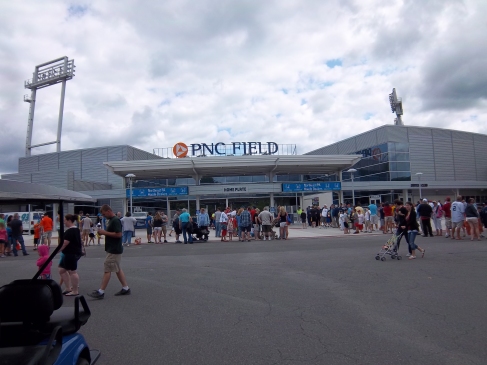 The only downside was that today, gates opened an hour before game time. So if there was any BP, I’d have to get in quick. In the meantime, I decided to check for Easter eggs around the perimeter of the ballpark:

After walking past this part, I came down to this area: 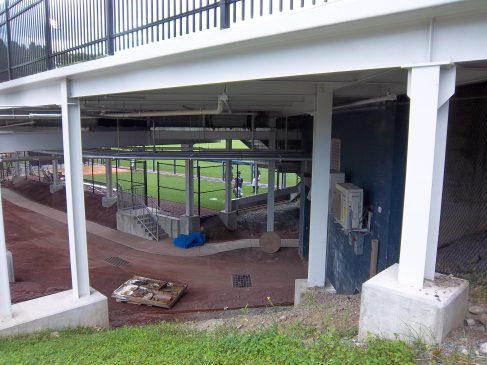 down to this area here:

and as you can see, there was another fence blocking off the back area. So much for that idea. The gates finally opened and we ran inside, only to find this:

Yaaaaaaaaaaaaaay. Eventually, some players came out to toss. Wherein I made my first mistake of the day. You see, since this was my first “RailRiders” game of the year, I:

Also, both teams had the same colored warm up clothes. I found this out when IronPigs players were out warming up and I thought they were RailRider players. So, yeah. No ball there. The 1 ball I had a beat on was tossed to a kid. Which is ok. Then, they disappeared.So this was my view for the next 35 minutes: 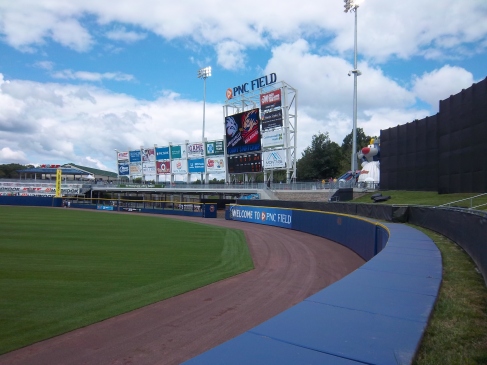 Gorgeous ballpark, not so gorgeous mood for me. I wasn’t too worried about my streak, because this wasn’t a MLB game. But I still wanted a International League ball. I was looking around the park for good potential home run areas, and noticed this. If you look a little closer at the previous photo, you’ll see this:

you’ll see the little chunk of grass in between the outfield wall and the black chain-link fence. If a homer was to land there (which was likely for a AAA game), I could easily pick it up. I wasn’t expecting the crowd to be too bad… the Yankees had a bunch of guys rehabbing here a few weeks prior but that was over with now, and it didn’t look crowded up until that point. So as of now, I had somewhat of a plan. I was going to hang out here on this grassy berm:

…and play my chances for a homer there. I figured until game time I’d still try for a ball so I headed over here and looked for any lingering homers from BP:

Nothing there. A few minutes later, this guy came out: 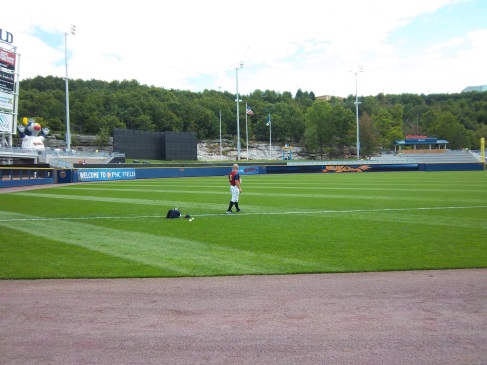 I think he was a coach, but he wasn’t a position player. He also had a ball in his pocket, and there was a bag nearby. What annoyed me was that there was no music playing in the park, and my cousin and I were the only people for about 5 sections to the left and right. Yet he proceeded to ignore me. He was too intrigued by his crappy cup of Dunkin coffee. I forgot about him and headed over to the bullpen where I knew players would be coming out: 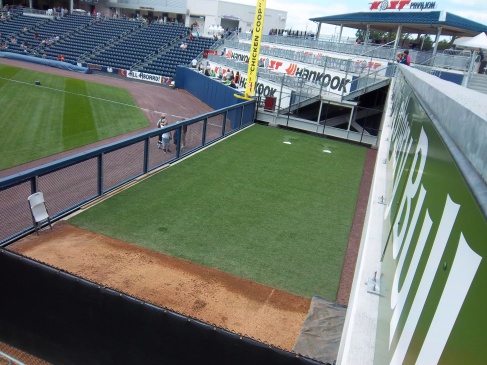 They came out after a few minutes like I expected them to, but most ignored us, and some said they weren’t allowed to toss us any balls unless they were homers. So that wasn’t likely either. The game started, so we tried for the warm up balls for both the visiting and home teams:

Nothing much goin’ on there either. To give you an idea of where we were, here’s a visual:

We were on the walkway above the bullpens. You can walk around the whole stadium. It’s nice. We were just hanging out on the berm, and it was around the 5th inning. There was no action at all in the game, so as my cousin and I were just about to call it quits and go back to our seats, this happened:   Yes, that was me who caught Cody Overbeck’s 17th homer of the season! As you can see, I was in the process of walking off the berm, when: 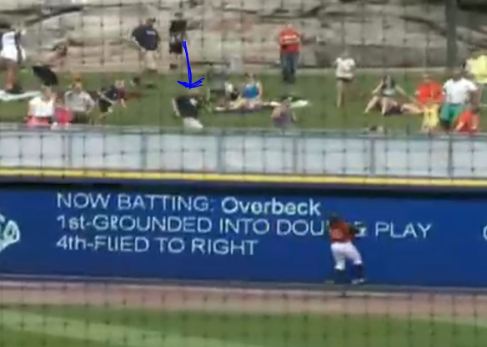 I ran back to my left. Then, I saw the ball in the air, but in 1 hand I had a bunch of garbage, and my backpack was half on. I kept running where the ball nipped off of someones hands, and I trapped my glove over the ball:

I’ll admit, it’s not as sexy as a MLB homer, but you know what? Who cares. It was a professional home run, and it was my first, so I’m going to enjoy it. Here is the ball:

It was my 1st homer, and my 1st international league ball. I was so thrilled with it that I didn’t bother snagging the rest of the game. I took my cousin down here:

and flagged down an outfielder and got my cousin to snag a 3rd out ball. Good times. Final score:

After the game, I headed up to the top of the mountain behind the stadium and took this photo:

Not bad. A long, and successful ballhawking weekend. To everyone involved, thanks for making it fun. Til’ next time.