It had been a long time since I’d been to Yankee Stadium. 3 months and 15 days, to be exact. The last game I saw there was 4/30/13 against the Houston Astros… so I thought it’d be time I get back there. I’d been going to Citi Field much more than usual because of the lighter security and lower prices. But I had an itch to ballhawk, and just the Yanks were in town, so I quickly made an Angels shirt (and then proceeded to forget it), and headed down to the Bronx…

Where I ran into a familiar friend:

Yes, that’s Mateo. If you’re reading this blog for the first time, check back to other posts and you’ll find him in a lot of them. That photo was taken by a new friend named Andy, who takes a lot of good photos. I misplaced his business card, or else I’d post his email and he could probably take pics of you hawking at Yankee Stadium. We talked for a while until the gates opened, and this is where my bad ballhawking luck came into play. I was third in line, so I had the security guard check my bag (they check it very in depth) to save me time when the gates opened. Then, like 4 more people behind me did the same thing. So, when it was 5:05 and they started letting people in, she asked me to check my bag again. I told her she literally just looked at it 5 minutes ago, but she insisted that I get searched again. So I had to empty my bag out after just putting everything back in, and the whole thing cost me 5 minutes. Ridiculous. When I finally ran inside: 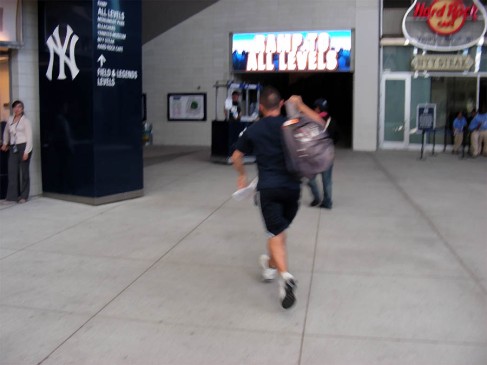 …everyone was already in the right field seats. I saw Mateo already had snagged 2 balls, so I knew Easter eggs were out of the question. I decided to walk down in foul territory since that was still empty, and I was rewarded with this: 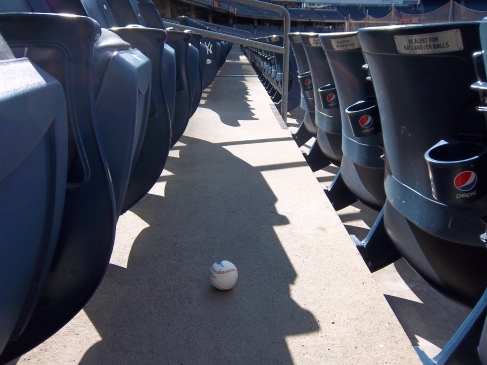 It was just sitting there. Perhaps the security guard was a blessing in disguise? Who knows. I headed over to the right field seats, where it was already getting crowded: 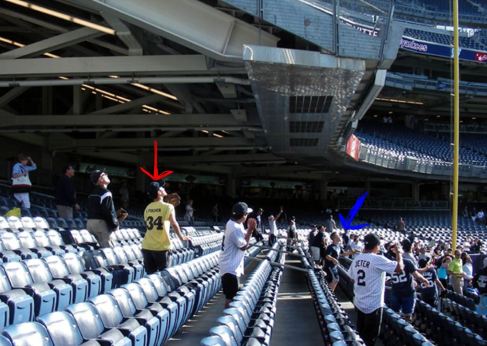 That’s Mateo in red, and me in blue. Neither of us caught that homer that we were all trying to catch. Things were slowing down a bit since the last group of Yankee hitters were about to get ready to hit. So while the coaches were refilling the ball bucket, I ran upstairs and decided to try my luck here (where I was then asked to show my ticket … really, Yankees?) : 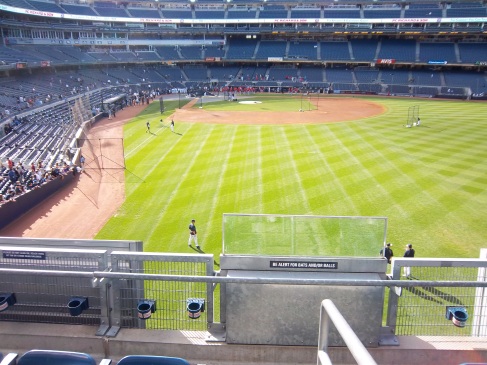 Sometimes Ichiro goes last and he can put on a show in BP, so I played my chances and had the entire section to myself. Of course, Ichiro had already hit. So, eventually when Boone Logan fielded a ball, I held my glove up and yelled his name. He saw me, only it was after he tossed a ball into the lower bowl. I through my arms up in disgust (playfully, mind you) and he held his finger up as to say, “one second.” The next ball he fielded, well…. 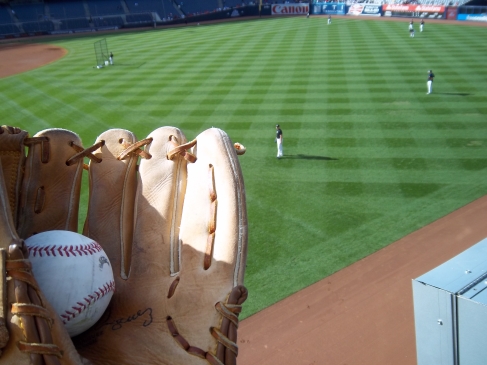 Thanks Boone (that’s him in the background). Shortly after, the Yankees were done and the Angels were getting ready. As I mentioned, it was around this point in time that I realized I had forgotten my Angels shirt. I had missed the Metro North train which I intended to take, so I had to drive to the game, and making the shirt was the reason I was late. So the sole reason I was late for the train was the shirt and I had forgotten it. I had a good bit of running room to my right, but other ballhawks had gotten the better sections so I was confined to the section by the bullpen for a bit: 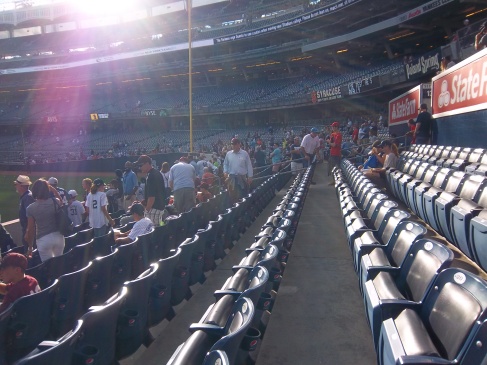 And here’s a shot Andy got of me with the 2 balls I had snagged up to this point: 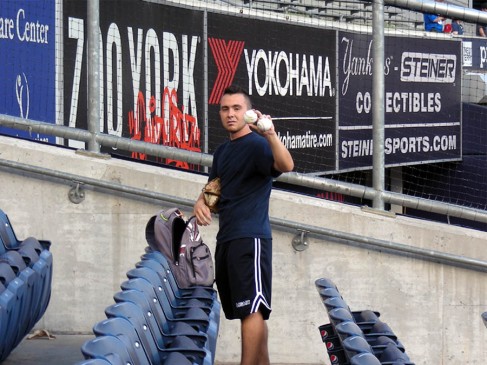 …and a shot of me and Mateo talking: 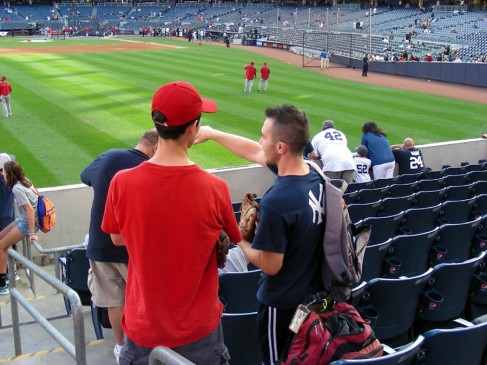 …if you’re wondering why my Yankee shirt is backwards, it was because I’d forgotten the Angels shirt and didn’t want the Angels players to see a Yankee logo. I’ll sum up the next 20 minutes quickly… I didn’t snag anything, and came very close about 4 times on homers. They were ricocheting all over the place, and Mateo beat me to two of them. One bounced off a seat, and I went to grab it on the ground and he got it before me. Then about 10 minutes later, there was a ball on the fly that I was panning to my left for, and I bumped hips with somebody who was a little taller than me, who just made the grab before me. When I looked to see who it was, it was Mateo. That’s just how things go sometimes. Here is a picture of me *playfully* calling him a curse word I probably shouldn’t write here: 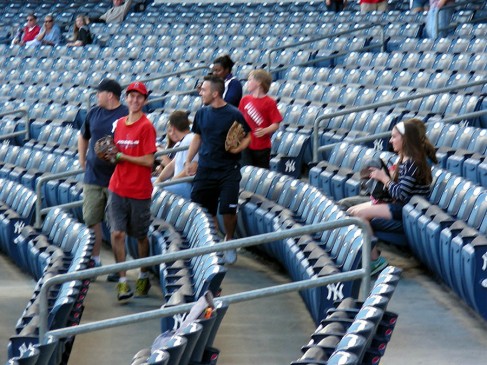 …and with that, BP was over. I headed over to the bleachers and tried the Harkey trick: 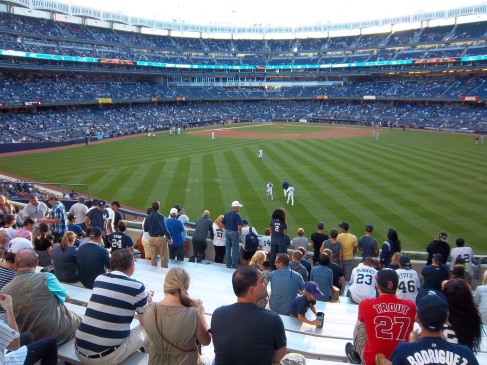 but there were too many people. I usually go on the batters eye food court, but the Yankees finally decided they could make more money by renting out that space for private events, and that’s what happened tonight. So I was stuck in the crowded bleachers. As for the game, I hung around all sorts of places, and took a shot of Ichiro legging out an infield single: 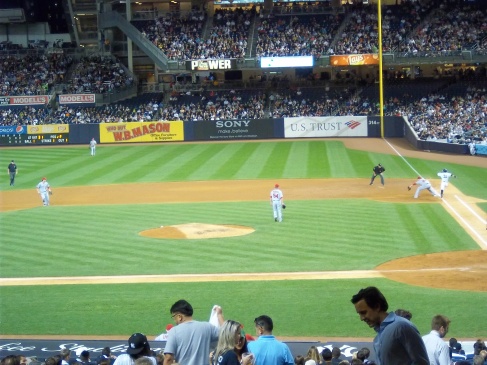 …just because Ichiro is the man. Then, I checked out the Steiner store and laid my eyes on this: 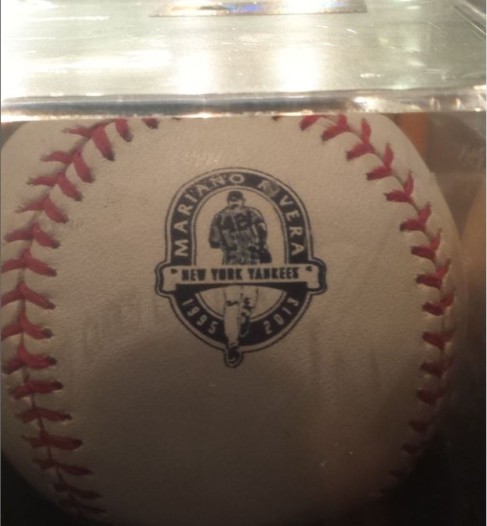 I asked if the Yankees were going to use these in game action, and of course nobody had any idea. Or, they did, and just wanted me to buy one. Which I might do at the end of the year, but I don’t want to give them the satisfaction. Reminds me of the Chipper Jones ball the Braves had last year. Then the guy tried to sell me an autographed set of 9 for $4,000 (HAHAHAHAHA), and later made insulting comments about the school I go to. Sorry we all don’t have $75,000 bucks to spend on an ivy league school.

I found my way here at the end of the game: 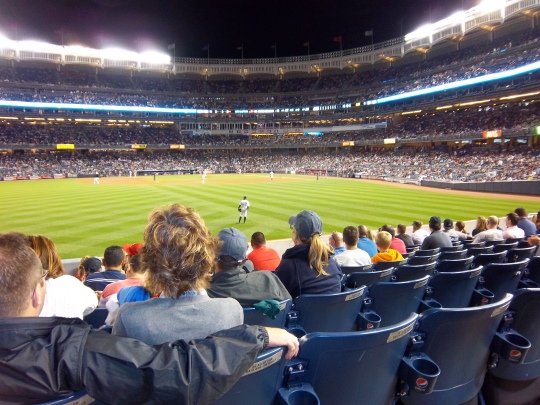 …where I hung out for about 5 innings. At one point, Ernesto Frieri was out warming up: 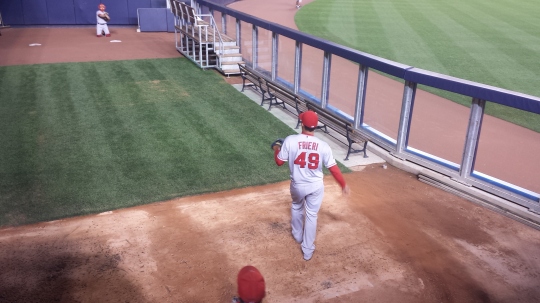 I had looked away for a second, to put my phone in my backpack. It was in that short amount of time that Frieri was done warming up, looked to give me the ball, and couldn’t find me, and tossed it into the bleachers, much to the delight of the usher in my section. Sigh.

Also, it was this game where I forgot my digital camera in the cupholders in this section, where, thankfully, a good Samaritan picked it up, looked on the camera for my info, and mailed it back to me. Without their good natured honesty, I would have lost all my pictures from my Baltimore trip, Ballhawkfest, PNC Field, and Provident Bank Park. So if you’re reading this, you know who you are. Thank you. 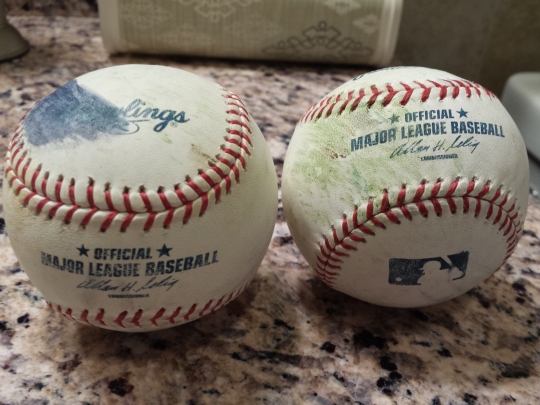 Check out that big-league smudge!