It was here… the first professional game played at Le Stade Olympique since the beloved Expos left for Washington, DC in 2004. I was always itching to see a game there, but in 2004, I was 15 years old and unable to leave the country by myself. I hoped and hoped every year that some kind of game… high school… alumni… college… ANYTHING would be played there. And I got my wish over the winter. The Mets and the Blue Jays were playing two exhibition games there in hopes of showing Major League Baseball that there was still a large interest in having a team there. I bought my tickets (for both games) the day they went on sale. I figured since I couldn’t go on the dream trip to Australia for Dodgers/D-Backs, this was more than ok. After getting out of my horrible grad school class and driving up through the rain for 5 hours, Natalie and I arrived in Montreal and threw on our baseball stuff for the first time in 2014: 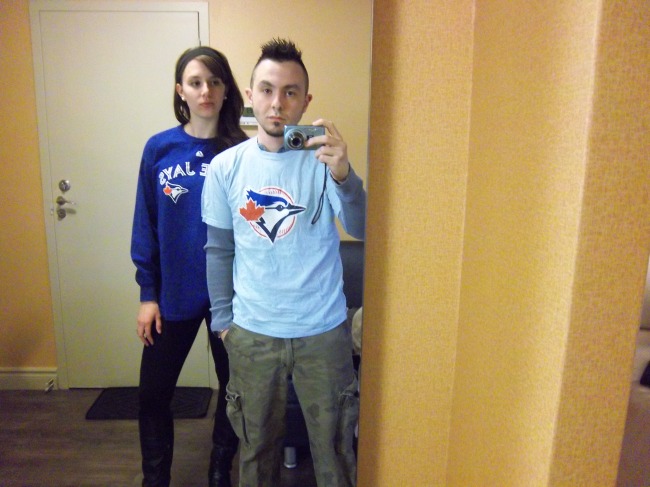 I wasn’t worried about the weather, we were going to see a game inside a dome. The temperature outside was around 39 degrees and raining for our walk to the train station: 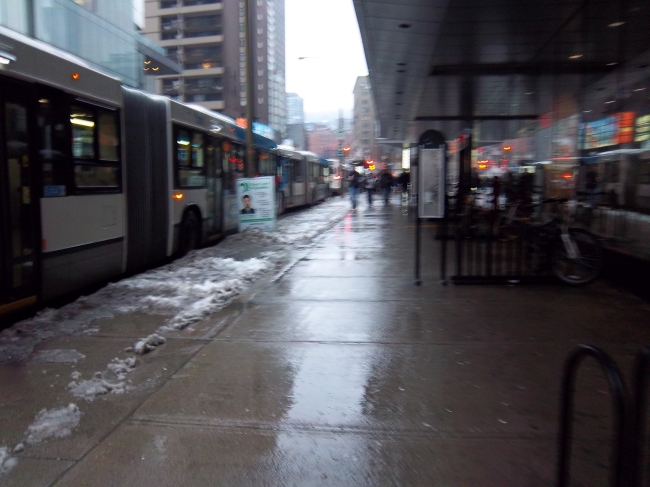 … and eventually our comfortable subway ride to the Pie-IX stop: 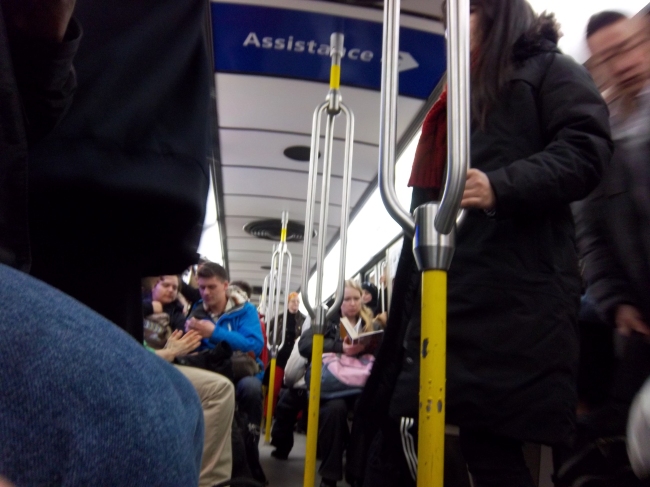 I didn’t know what to expect when I got there. Would it be crowded? I read articles that the company who headed the two games, Evenko, sold over 90,000 tickets for the two games. Where would I go when I got inside? Which gate is best to get to the outfield? What’s security like? The cool thing was that nobody else knew, either. So I was eager to get there. When you get off the subway, the station is built into the bottom of Olympic Stadium. So I was greeted with this: 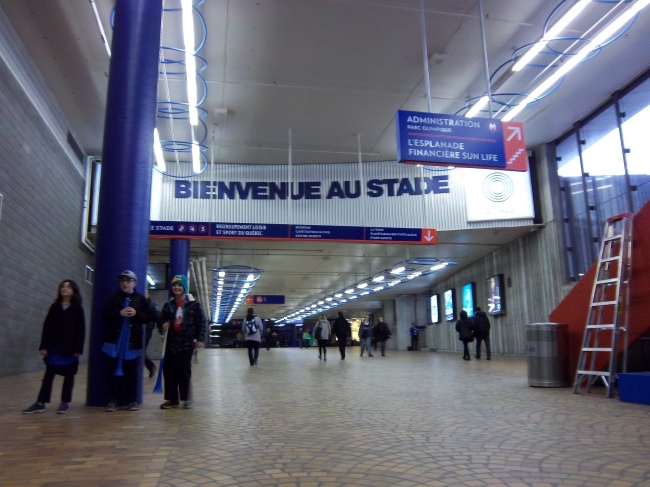 I was surprised when we got up to the lobby that it was packed. Like, seriously crowded. Out of sheer luck, I spotted Todd, his two kids, Avi Miller, and a new Montreal ballhawk (!) named Michel Audet. He somehow knew some stuff about Olympic Stadium, so we hung with him. He’s a nice kid. The buzz for the game itself was getting so much attention. We were right at the front of the line, so I am definitely in pictures and on TV somewhere in Canada. I couldn’t find it, though. Check it out: 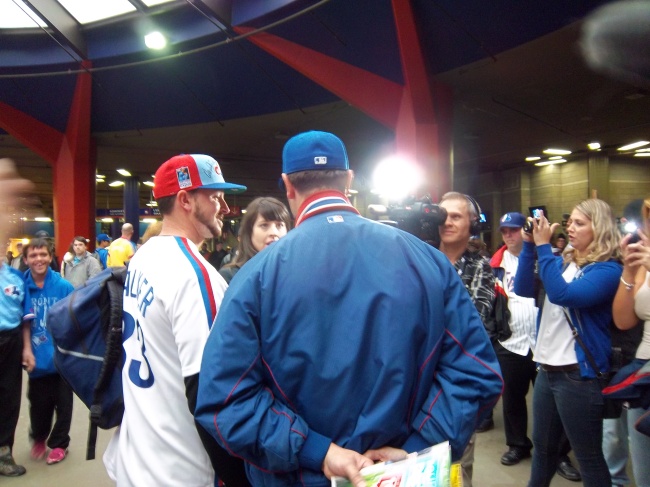 The atmosphere was electric. Every person who had Expos gear on was getting interviewed by someone. There were chants of “We want baseball!” and “Let’s go Expos!!” every two seconds. I couldn’t wait to see how the game would be. We got there so early because we wanted to be first inside for BP, so waiting around for almost two hours felt like an eternity. I was first in line, when another familiar face came by, by the name of Greg Barasch. So it was almost like a mini-ballhawking convention. We were lined up away from the actual gates: 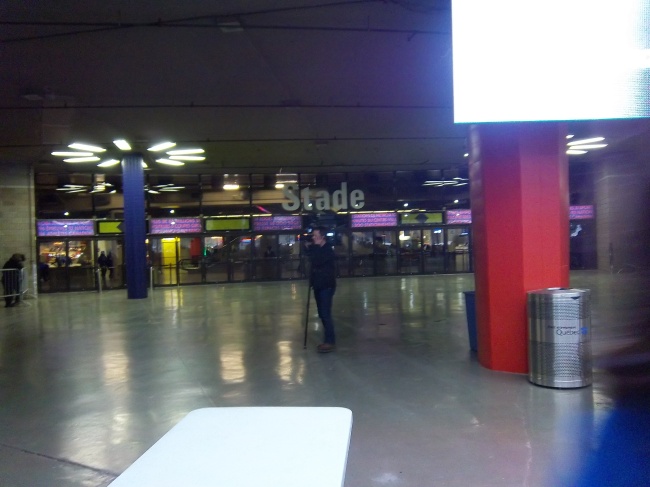 Eventually, before the gates were supposed to open, they checked bags and let us move up to where it says “Stade”. There, we waited longer and everyone got restless, as you can see by this guard trying to calm everyone down: 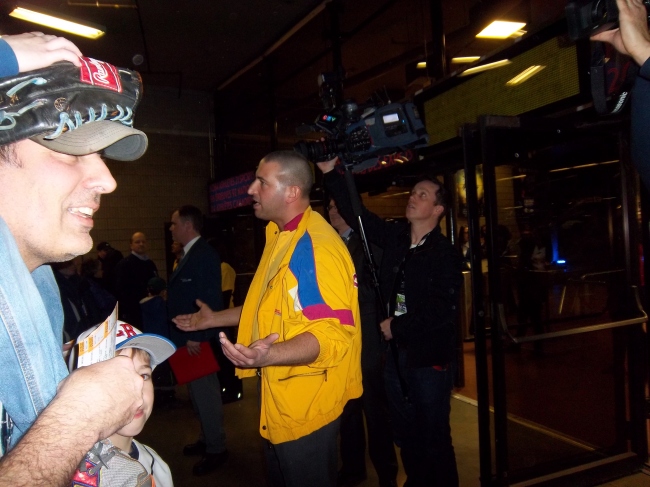 I ran into that guard several times this weekend, and he was really nice. he also tried to sell us his hideous jacket for $10. Seriously. Like I said, I was first in line: 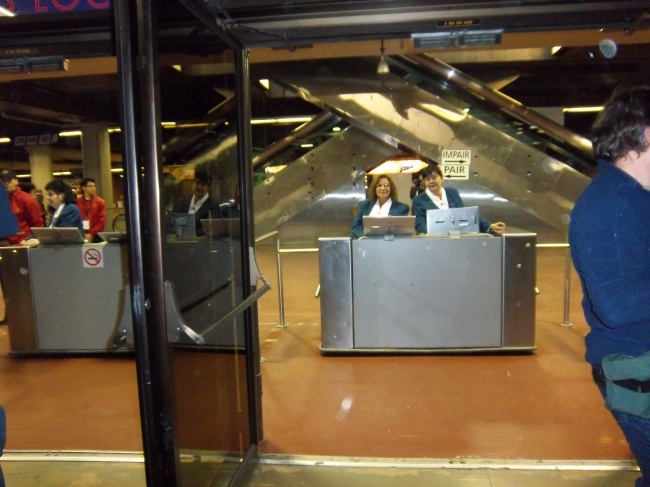 The whole set up was bizarre. I felt like I was waiting in line to board a plane or something. The tickets weren’t even scannable either, they had to be ripped. And the lady took forever to rip it. Canada is interesting. At long last, I was inside: 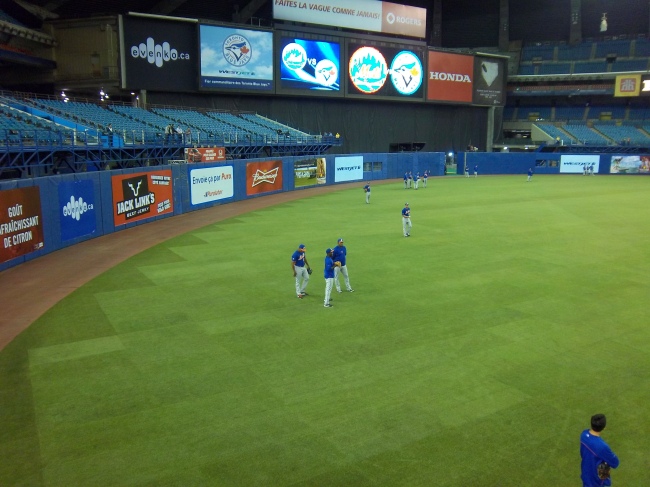 Here’s how it looked towards home plate: 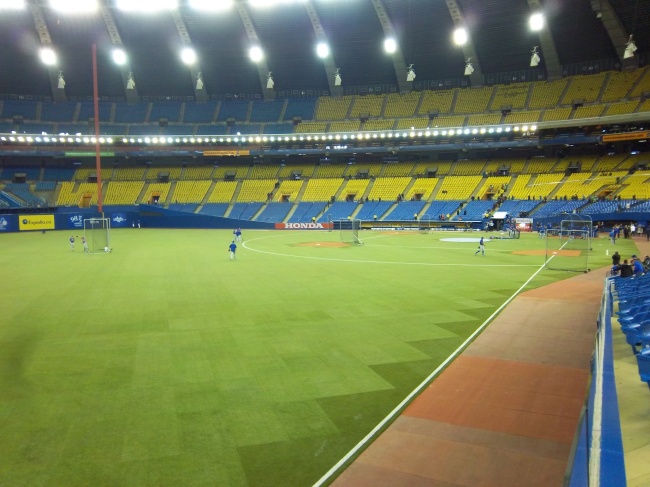 Awesome. I kept distracting myself with taking pictures that I almost forgot to snag. I headed over to left field, but look at this cross aisle: 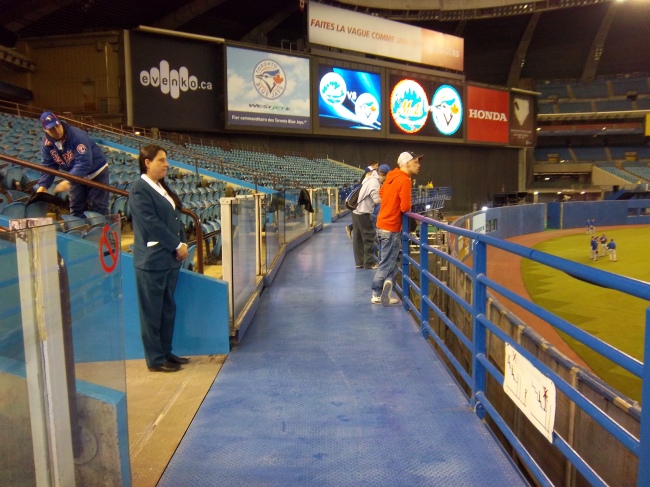 if only one of the New York stadiums had a cross aisle like that… I could have 300 baseballs. More on that cross aisle in Game 2. The outfield wall is very high, and the gap between the wall and the stands is pretty far. Check it out: 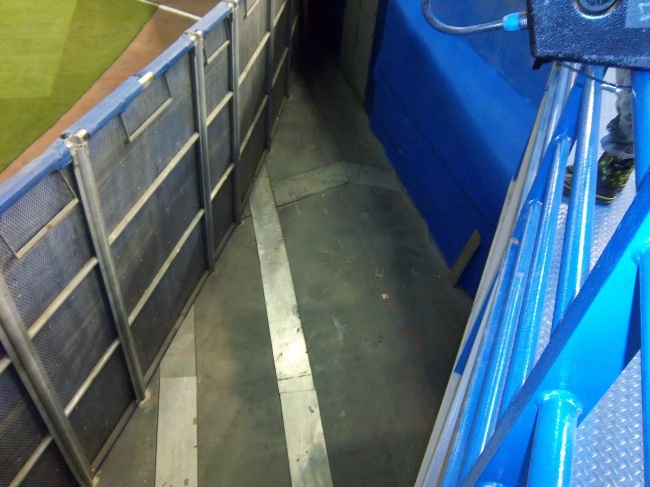 See the two silver lines? The stands actually move on those and expand and contract outward for soccer and football games. I was talking with Avi about the gap and how they’re not allowed in Major League stadiums…. (again, more on that in Game 2). I also got a kick out of the *killer* sound system they had installed: 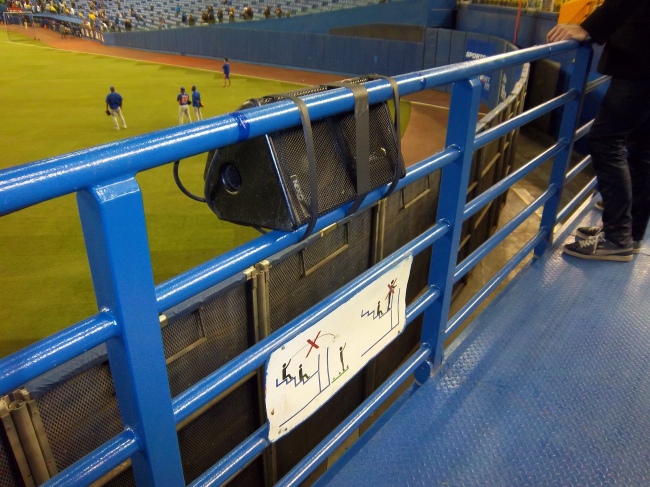 A speaker and duct tape. Got it. Even that random sign under it was funny. I loved it. I also lost Natalie. More on that later. Eventually, I did snag my first ball of the day: 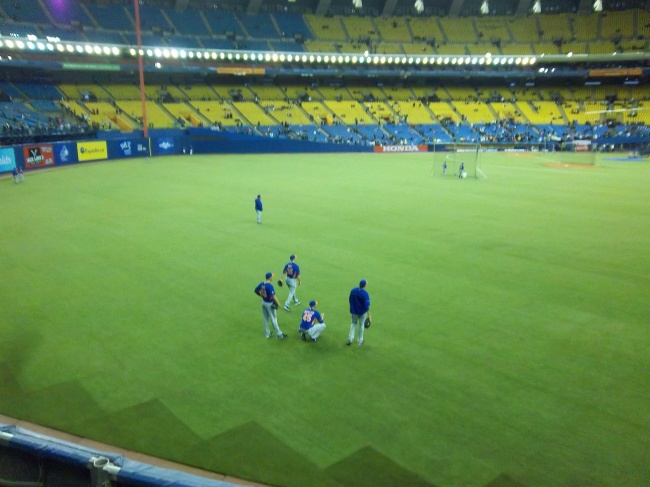 It was a toss-up by Bartolo Colon. It was hard, because the Mets brought guys up to Montreal who weren’t going to be on the Opening Day roster, and I couldn’t look them up on my phone since I was in Canada. #firstworldproblems

When we first ran inside, Todd showed me that he snagged a World Baseball Classic ball: 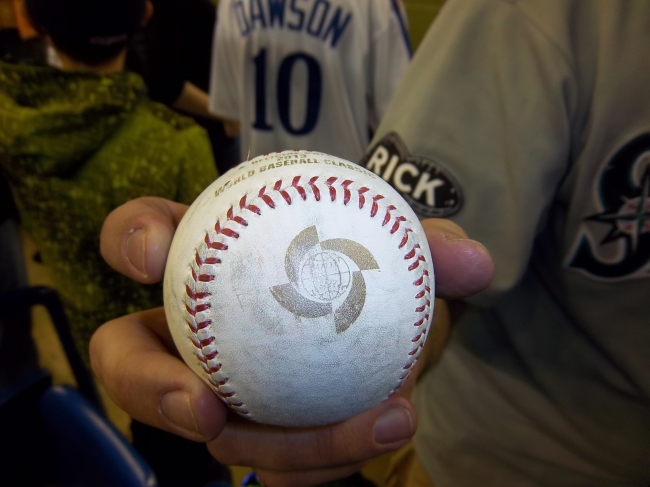 …As well as a 2011 All-Star Game ball. When I opened my glove, i had a 50th Anniversary Dodger Stadium ball. I already had it, but it was still cool. Heres a better look at the gap between the wall and the seats: 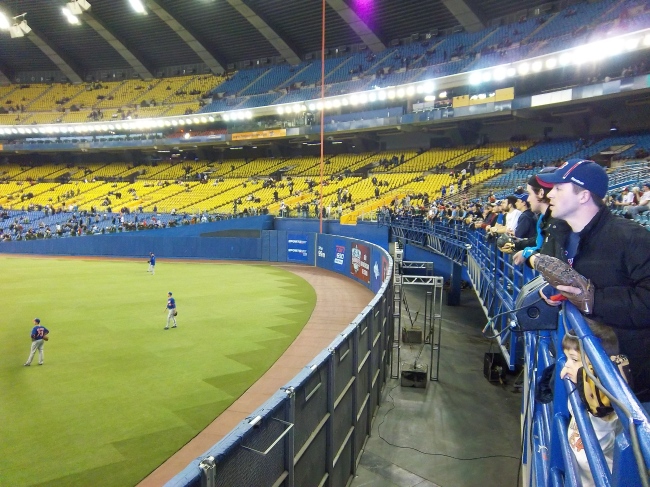 That’s pretty wide, and uncovered. Besides navigating between a mob of fans, if you ran backwards to catch a ball on the fly (which didn’t happen much… the balls were dying out at the warning track for the most part), you had to remember these random glass panels that were in the way: 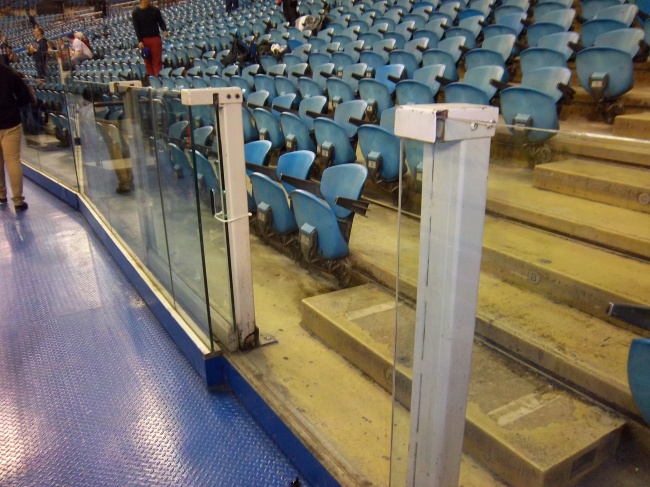 I ran into them twice. At the end of BP, Mets pitcher Scott Rice came up the stairs and was talking to a fan: 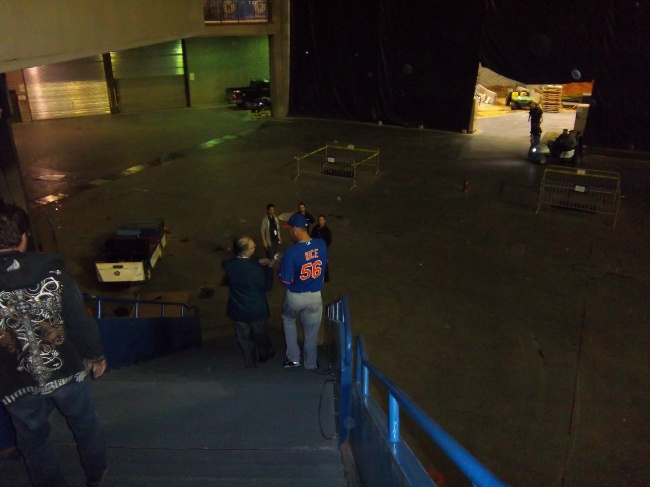 …And remembered me from the day he had a catch with me. How cool is that? He also promised to toss me a commemorative ball the next game, if I was going (of course I was going). I then remembered that I still didn’t know where Natalie was, and couldn’t call her since I was in Canada. We had a plan to meet at our seats, which we did… which were up top: 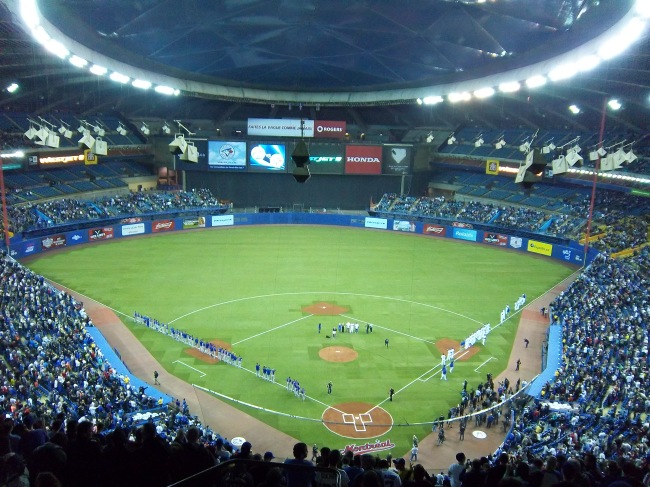 Nice view. they also did a nice Gary Carter tribute pregame… but did i sit there the whole game? NA. I sat here at the beginning of the game: 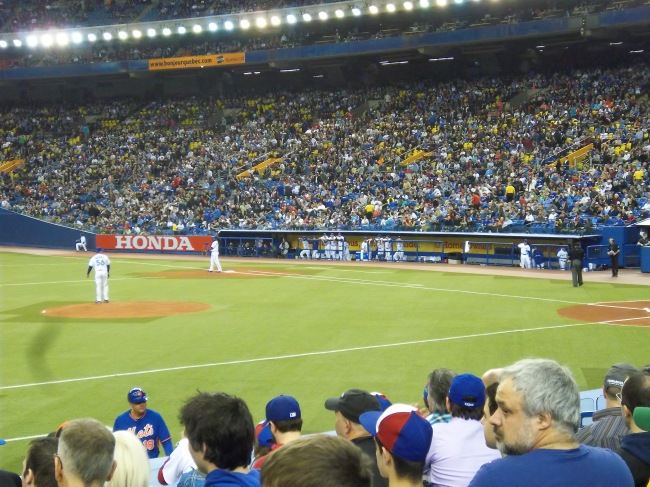 Now that’s more like it. I got down there just in time to see the first baseball pitch in Montreal since 2004: 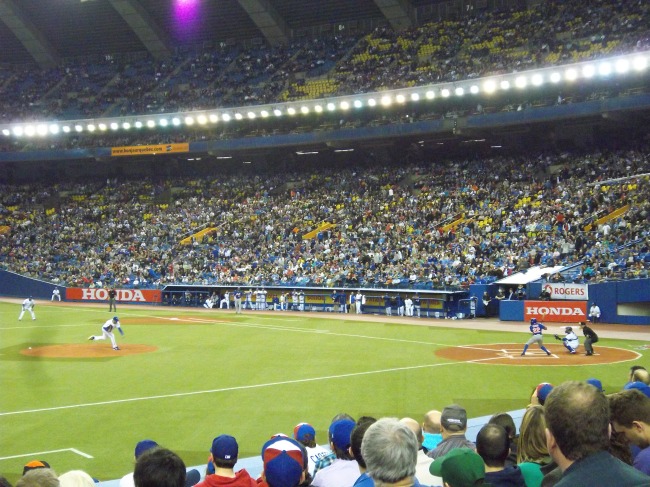 I was sitting near Greg and Avi (Avi managed to snag a piece of one of the seats. Shh.) after not succeeding in a 3rd out ball because of wayyyy too many kids, we wandered out to here: 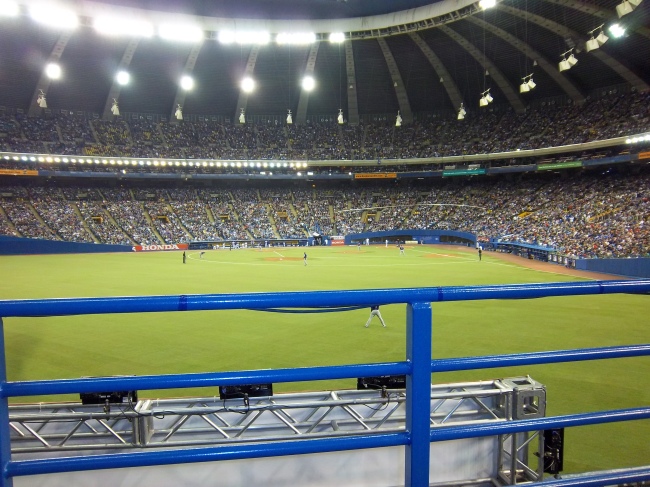 …where I just missed out on a Jose Bautista homer hit over my head, and an Edwin Encarnacion homer that would have landed in my lap had it carried further. I saved my exploring for Day 2, but here’s what it looks like behind the left field bleachers: 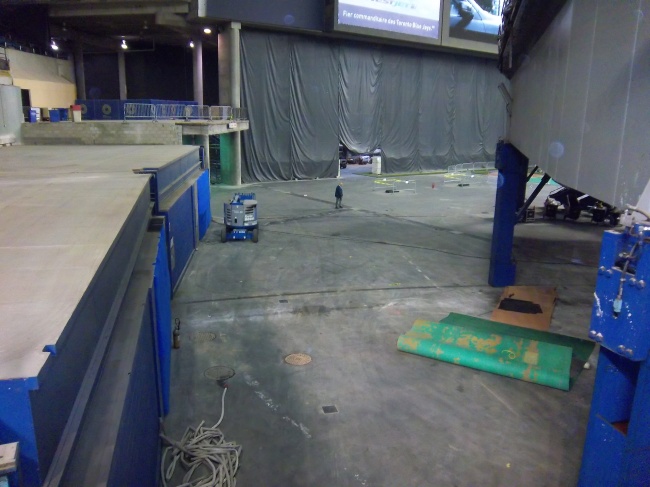 Random. Unsightly. Ugly. I love it. Here’s another view: 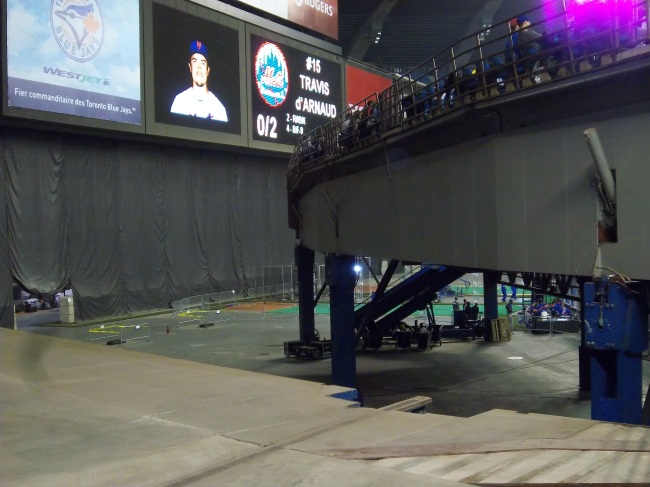 Yes, that’s the bullpen in the background. More on that in Game 2. the game itself was actually pretty entertaining. The Jays won on a walk-off single up the middle. Final score:

I was pleased with my 1 snag: 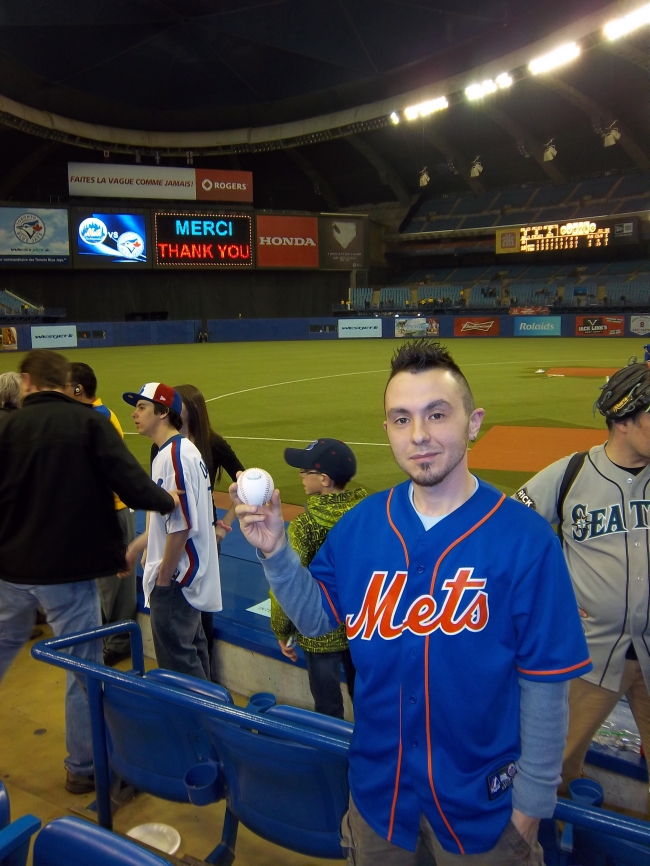 …and took a picture with the guys quick before getting back at it in less than 12 hours… what  a day: 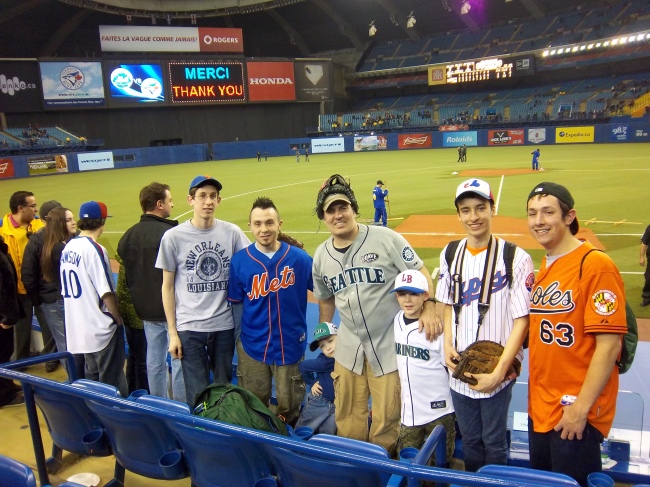 From left to right, if you don’t recognize anyone: Greg, Me, Kellan, Todd, Tim, Michel rocking the Expos jersey, and Avi. Natalie took the picture. Day 2 next! 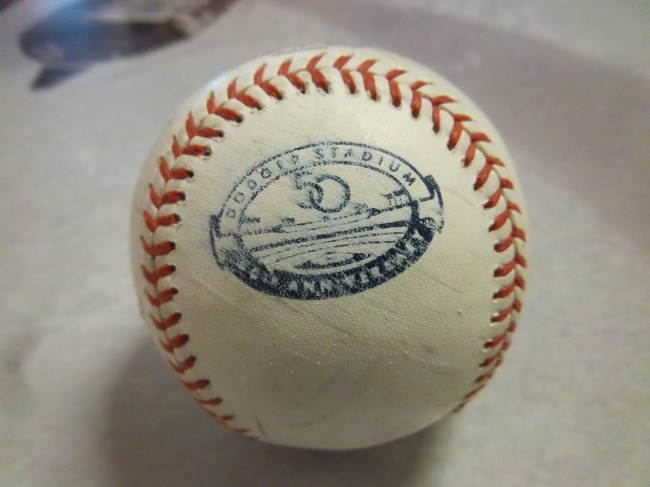