Today was possibly the worst ballhawking day possible. A few days prior, I had bought the tickets because it was my only day off from work. What I neglected to do was check the weather. The forecast for the game was rainy with temperatures barely exceeding 40 degrees. With wind. I’m an idiot.

I brought my friend James with me to the game, and it was his 1st ever MLB game. I don’t think I could have brought him on a worse evening.

Here was the busy and exciting scene outside of Citi when I arrived shortly after 4:30 p.m.:

After waiting outside the gates in excruciatingly cold winds, the gates opened and I already knew there wouldn’t be BP. And there wasn’t. After a few minutes, though, the Mets came out and started tossing. So I figured at least they’d play the game. I was mainly concerned at this point with getting 1 ball and keeping my streak alive. Here was the scene shortly after:

Closer to me, I had Jose Valverde (who isn’t really regarded as fan-friendly) tossing with Bartolo Colon. I wondered if Colon remembered me from Montréal. Everyone who was tossing then did the following:

A) overthrew the ball into left field and left it there
B) threw it behind to foul territory.

So that was that for the pre-game toss. Still off the board.

Eventually, the tarp came off:

I was situated out by the Mets bullpen. I was literally the only person there besides James (who left to get fried dough), and some other kid who was wearing a black jacket. I had on my Mets gear. I signaled over to Ricky Bones who had a few balls in his hand. He was about to throw to me one when he pointed at something, and then threw it to the other kid.

And that was it for pre-game. Still ball-less. I didn’t know whether to hang out by the bullpen for the starting pitcher warm-ups, which was a risk… or sit by the dugouts. I chose the dugouts:

I situated myself here for the pre-game tosses by the infielders (who at this point only had one ball with them). You would think that since it was 40 degrees out you would want your arm to be warm. But nobody tossed at all, and Brandon Phillips tossed the ball to his right (my left) out of reach. At this point I’d have to get a gamer in order to keep my streak alive.

I sat here during the game:

As you can see, it was raining, and hardly anyone was there. This was tough because the guards were more lax than they usually are, and let people move down. Therefore, after every half inning the lower part of the section near the dugout was mobbed, and for some reason Todd Frazier kept throwing balls to the same two people, and Joey Votto wouldn’t throw anything at all. He seems like a jerk. Hopefully I’m wrong. I was wearing a Reds shirt, and the security guard in my section saw the previous two 3rd out balls tossed right at me get caught by other people. He tapped me on the shoulder and told me to get right in front, which was nice of him. At the end of the 7th inning, I got 1st base coach Billy Hatcher to toss me this:

…it wasn’t a gamer, but a warm-up ball. And I’ll gladly take it. Streak intact. The weather was nice and co-operative:

There was two innings left, so after being cold and wet, James hung out under the overhang and I hung out here chasing foul balls: 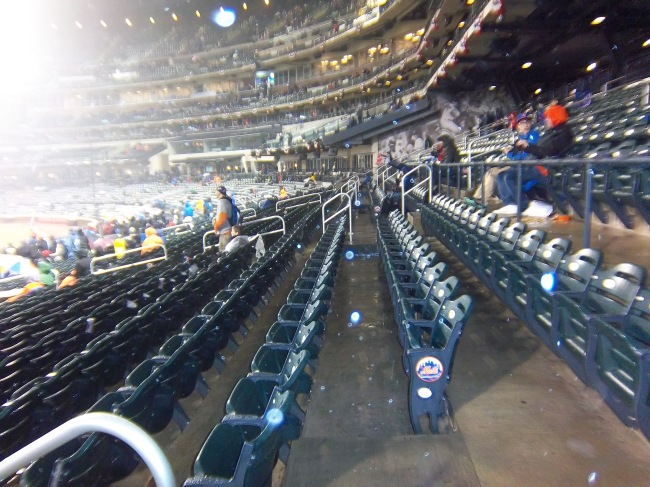 I didn’t get a foul ball. I headed over to the umpires tunnel at the end of the game, and home plate ump John Tumpane handed a ball to the guy directly in front of and behind me.

A day to forget mostly at Citi.