The day started off in the morning, meeting at a park in Virginia somewhere to have the home run derby and skills challenge. A lot of ballhawks were there hanging out and catching up, and for some incredibly stupid reason, I took zero pictures.

Afterwards, we walked over to a restaurant and ate, mingled, and won “door prizes” courtesy of Alan (MGB founder) and some other folks. I didn’t take pictures there either (IDIOT!).

I also neglected to take any pictures at the gate hanging out with everyone, as well. Maybe I was distracted.

Fast forward to BP time, where I started off here:

For some reason, I was allowed over here yesterday, but today, I was getting a lot of crap from the center field ushers about having to wait to go over to right field even though the day before, I was there. And, there were people there now. I slipped past him when he wasn’t looking, went up a staircase, and down a separate one and was in right. I had a decent amount of space to move: 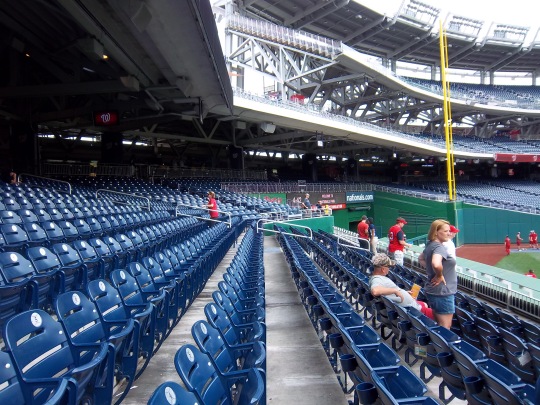 …and if you look close enough, in the mini pizza wedge off to the right, you can see the Cooks doin’ their thing.

In this photo, you can see the other ballhawks in their neon green shirts (you can click to enlarge): 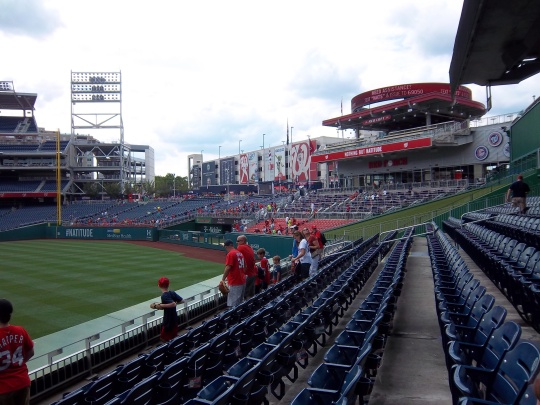 I don’t like wearing the shirts during BP, because yes, its fun to spot your friends at any second, but I don’t want the players recognizing such a neutralizing color. So I wait to wear the shirt.

Things were getting a little dicey as the day went on. The Nationals hit for a short while, but I was still scoreless. When the Brewers headed out, I went over to left field mainly because nobody was over there, and eventually got new call-up Jimmy Nelson to toss me my 1st ball and get me on the board. The Brewers also weren’t hitting much, so I didn’t snag much during their session either. I went over to the left field bullpens. Why you ask?

I eventually got Lee Tunnell to toss me one of those pregame. He’s awesome.

I spent the game here: 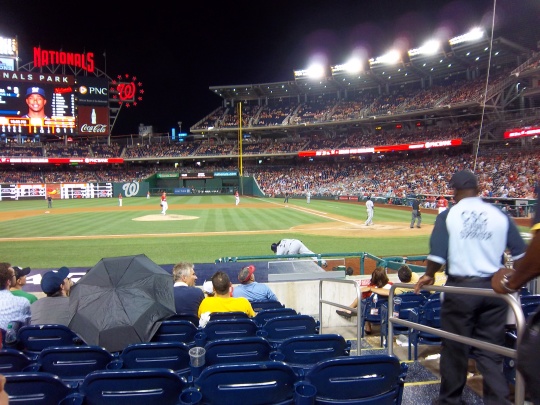 After running around for two hours in the 90 degree heat, I pounded down 2 apple cider things (not sure what they were called, but they were cold, and refreshing). I took turns alternating innings on the aisle with someone new that I met, he goes by the name of Happy Youngster. You can check out his twitter here. We spent a lot of time talking, and hes a really cool guy. If you ever get a chance to see him, tell him I said hello.

After the bottom of the 5th inning, Marco Estrada struck out Tanner Roark, and then Jonathan LuCroy tossed me the strikeout ball for my 3rd and final ball for ballhawkfest. Here is a photo of everyone who came: 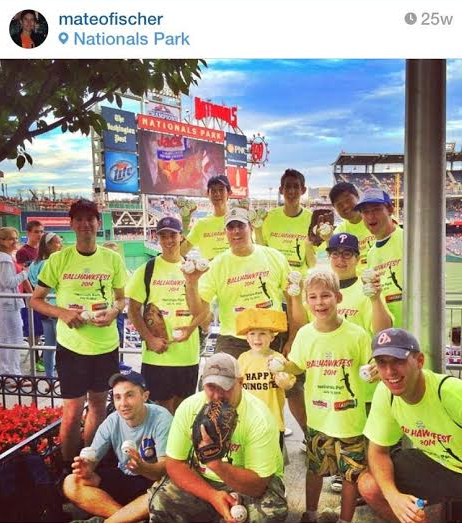 Let me try and do this right: Starting with me on the bottom, you have… me, Rick Sporcic, Kellan and Tim Cook, and Alan Schuster.
The next row up left to right is Rick, Grant Edrington, Todd Cook, and Harrsion Tischler.
The last row features Mateo, Greg, Tak, and Happy.

Also, thanks to Mateo for unknowingly letting me screenshot the photo and use it.

And finally, my final haul for the weekend. It’s hard to write about every single thing that happened,but overall it was a very fun weekend and I’m glad I was able to attend.

After the game, a post-game Austin Mahone concert was about to begin, which was my cue to head out of there.