I had the entire day free, and was off from work the next day, so I decided to hop in the car and go here: 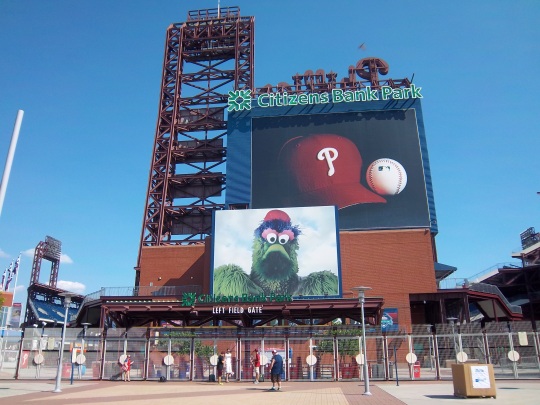 I wasn’t alone, however. If you look under the picture of the Philly Phanatic, you can see three people. I stopped in Manhattan and picked up Greg, Mateo, and Mateo’s roommate from college, Sean.

This made the car ride go a lot quicker, for sure. We left earlier than usual so we wouldn’t lose time in New Jersey in traffic, which is always a given. We also endured many fun things on the way, such as people driving wherever they pleased, gridlock, tunnels, turnpikes, and everyone napping (besides me -__-). As you can see, we got there in plenty of time with lots of line space.

We had a nice long catch outside CBP, and 5 minutes before gate opening, here was the line:

I guess being in last place will do that.

When I went inside, of course the Phillies were just about done: 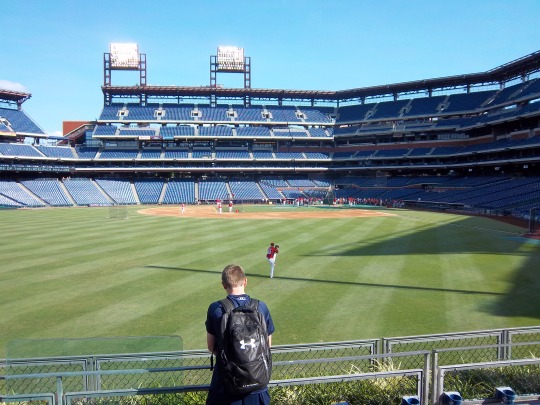 It was a frustrating day. From what I remember, Greg had a few bad bounces, as well as me, and Mateo only got one or two. When Arizona came out, I headed down the left field foul line and got Addison Reed to hook me up for ball No. 1 on the day.

I noticed that right field in foul territory had virtually nobody there, so I jogged over:

I got Chase Anderson to toss me ball No. 2, likely because he was looking to get rid of it, and I was the only one who yelled his name out.

I headed over to straightaway right, where I got Nick Evans to toss me Ball No. 3 of the night. This one was cool because there was a homer that landed in the seats, and I could have easily taken it. Instead, I let a little boy grab it, and Evans must have saw because the next grounder he fielded, he pointed to me and tossed it up to me.

Also, Evans signed in Japan right after the game. So who knows, maybe I snagged his last ever ball given away in an MLB game.

I caught up with Greg after BP, and he was a bit busy:

He was cup tricking a ball in the center field batters eye, and after about 5 minutes, he finally got it. He gave it away after all the hard work, but he had a decent audience watching. Imagine him doing that at Yankee?

Before the game, I perched up by the Diamondbacks bullpen: 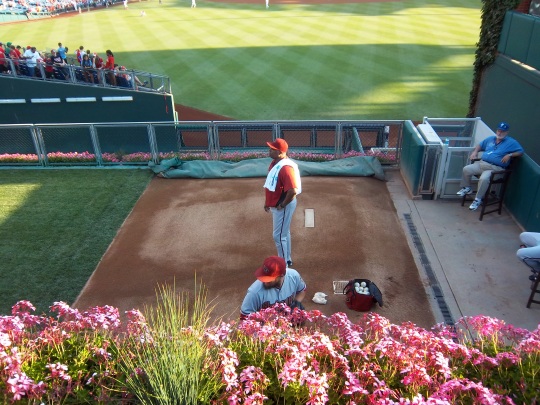 Their bullpen coach this year is Mike Harkey, who you might remember from the “Harkey trick” at Yankee Stadium where he’d throw about 6 balls into the bleachers before the start of every game. Maybe he remembered me, because he ignored me. I also need to learn to be more vocal. I was too apprehensive to yell out at first, until Greg did and got a ball. They don’t know me, so why should I care if they think I’m annoying or if they say no? That’s my new goal for 2015.

During the game, I sat here:

This was nice, but I couldn’t seem to snag a gamer. The warmup ball every inning went to this guy:

That’s Henry Blanco, who ignored me every half inning. I was the only one trying, and the only one in a D-Backs shirt. Seemed to be the theme of the night. I even got a few texts from Greg, which said a blunt “WTF?”

After the game, we drove Mateo and Sean to the bus station, where they were going to the airport (I think?) the next day. I drove home with Greg and got home very late.