Commemorative balls were all the rage this week with the Nationals. The rumor (and I’d seen on social media) was that they were using old commemorative balls for BP. They included: Mets 50th anniversary, Red Sox 100th anniversary, Target Field, HHH Metrodome, 2010 All-Star Game, 2010 World Series, and 2009 All-Star game balls. The Nats were in New York the next week, but what if they ran out? I couldn’t take the chance. So albeit a tad last second, I bought 2 very cheap outfield seats on StubHub, grabbed my friend Bryan, and hit the road for Philadelphia. I for some reason thought the gates opened at 4:45, where in fact they actually opened at 4:35…. So I was 10  minutes late. So, when I got inside, here was the action:

It was one of those days where there was like 20 people in the crowd, yet everyone got ignored by the Phillies. I’d say about 5 minutes later, I snagged a Darin Ruf homer that bounced off a seat and was just mid-air for what seemed like an eternity, so I just snagged it without any competition for ball No. 1 on the day. It was nice to be on the board, so now I could focus on trying to snag me some commemoratives. After Carlos Ruiz hit, things pretty much died down for the Phillies part of BP where a lot of standing around was going on:

…yea. Thankfully, the Nationals finally came out to toss, so I threw on my Nats gear, headed over to the foul line, and quickly got hooked up by this player:

That player would be Erik Davis, watching Tyler Clippard stretch. I was also proud of myself for catching the first mygameballs.com ball from Erik Davis. That’s the first time that’s happened to me. For the record, this ball was not a commemorative. From the ones on the field I could see, it didn’t look like any of them were commemoratives. I waited for some to be hit into the stands, when I noticed that Rick Gold was there, along with Greg Barasch. So the competition was there. Just needed one to be hit out to me. So I waited and waited, and nothing. I was also eager to try my new cup trick I had made, but I didn’t even get an opportunity to use it because none reached the warning track. I then got another toss up from Fernando Abad:

I noticed that right field was unusually empty, so I headed over there to try for something to get hit. I went to the “pizza wedge,” since it was up for grabs, this way I had access to all the players in center field, but I had no luck there:

At the time, I wasn’t able to identify Davis, who threw me the ball earlier. So every time I asked Davis for a ball in right field, he ignored me. Now I understand why. I noticed Rick out in right field and he told me that maybe one or two went his way, but they took bad bounces. While i was there, none went out into the seats. Not one. BP was almost over, so I decided to head over here so I’d be able to get to the dugout quick:

I tried getting Scott Hairston’s attention, and I couldn’t help but notice this one kid behind me. The entire section was empty mind you, but he insisted on standing right up my back in case I dropped the ball, I’m assuming. but I’d move over and he’d move with me. and it was the 2nd time in 2 games this had happened. It was so annoying. Anyway, I didn’t get one from Hairston, so I ran over quick to the dugout:

…nothing there either. So, that was it for BP. It looked like my only chance now was next week in New York. Unless I tried over by the bullpens before the game. I headed back out to the pizza wedge, and watched Roy Halladay warm up:

…and got Jesus Tiamo to FINALLY throw me a ball for my 4th of the day. I had such a hard time with him during ballhawkfest, especially when he’s this supposedly huge “fan-friendly” guy. I moved to the top of Ashburn Alley, positioned in front of the Nats bullpen. The starter came up, followed by Jim Lett (who I’ve had terrible luck with), and Nilson Robledo. I figured this was my chance, and it might not even be a commemorative.  So I shouted NILSON! Flapped my glove, and he tossed me one from his back pocket. Take a look: 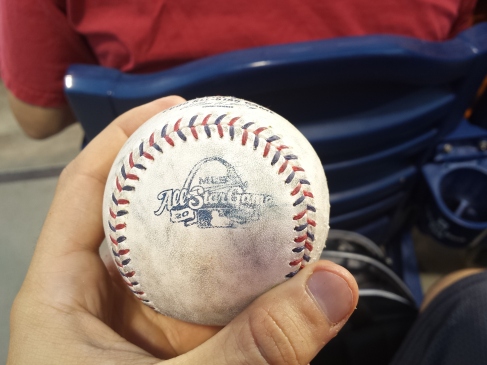 Alright! It wasn’t all of them, but it was one of them. And it was a bit smudged, but you can still make it out. I was happy. I headed back over to my seats:

It gave me great pleasure to walk right past the ushers that gave Zack a  hard time and show them my ticket which was for an actual aisle seat and then they left me alone the rest of the night. I also had an amazing cross aisle the entire night to myself: 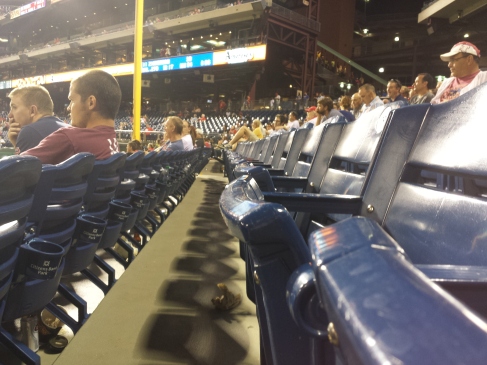 And later on, in the 8th inning I believe, Ryan Zimmerman homered to the section right to my left. Here I am in the screenshot from the game feed: 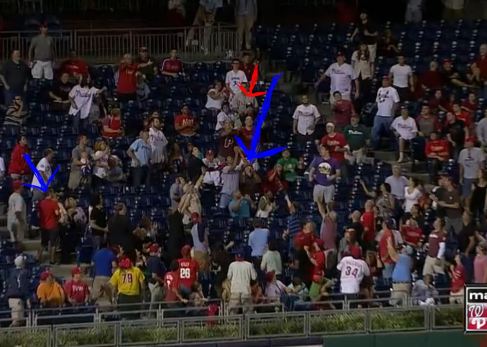 The blue arrow on the left is me. The blue arrow in the middle is the guy who caught it.  and the red arrow was Rick Gold. I didn’t bother to run over at the time, because I thought I had to run past 2 ladies who were sitting down. On second looks though, I had a EMPTY row to run over, and to make matters worse, the guy bobbled the ball. Oh what could’ve been. Enough over analyzing. Here’s how we felt about it:

I didn’t snag anymore balls the rest of the night, and made the 2 1/2 hour journey back home to New York. Final score: