The day after being at US Cellular field, it was on to Milwaukee via Amtrak: 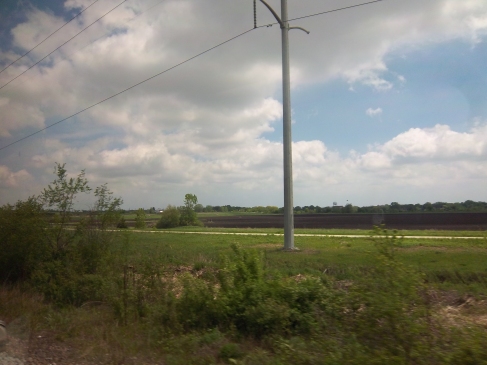 Good old Wisconsin. We had some time to kill, so we walked around the downtown area for a while. The hotel wasn’t in the greatest neighborhood Milwaukee had to offer, and maybe it’s because I’m used to killing time in New York City, but we were sort of… bored – would be the word I’d use. But we kept on walking around and got a bite to eat:

Also, don’t forget- no cooters near the riverwalk:

Tee hee. After that, it was time to grab a cab over to Miller Park:

Sweet. I walked around to do the usual lap around the stadium, and.. it was pretty routine looking. There were memorial tiles along the walkway for the players with retired numbers… 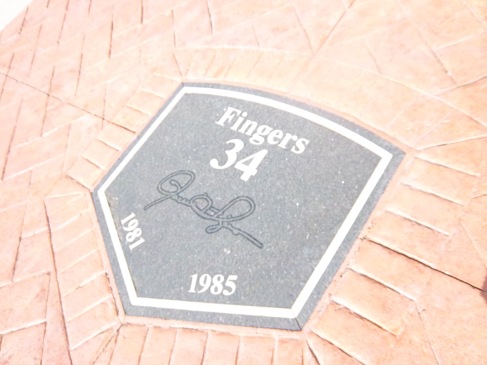 …I continued around the back:

and past a Brewers private party tent of some kind:

There was more of that until we got to the back of the stadium where the stadium scoreboard and windows are:

As you can see, it’s nice… but I feel like it’s lacking that little extra something that wows you. Still nice, nonetheless. I did think the roof was nice though: 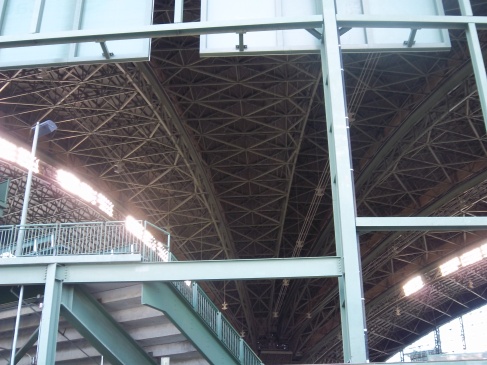 …and headed past the “Harley Davidson” deck and over to the left field gate:

…and waited here as we were 1st in line: 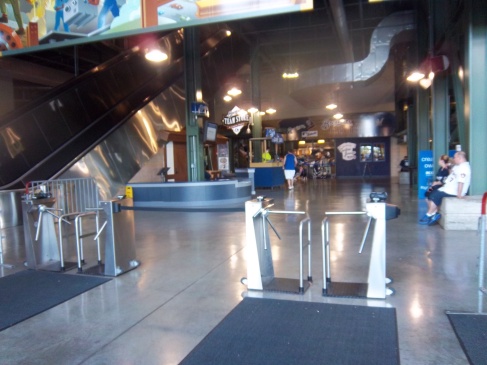 Now, I was going to go in early for the TGI Friday’s deck, but you have to have a 35$ minimum and an hour max to sit and eat. Plus we already had eaten. I also had texted Shawn Bosman to see if he wanted to meet up. He was already inside, so I had to wait until 5:30 to go in. The Brewers are another team that does the 90 minutes of BP like some other teams, which I’ll never understand. If I ran a team, I’d think my fans would want to see the hometown crowd hit. Whatever. It was 5:30, and I ran upstairs to the bleachers in left field:

There were about three balls below me, and it was fairly quiet in the park. The players definitely heard me, but weren’t throwing anything up. I saw Shawn miss out on a ball that someone knocked out of his glove, and other than that, nobody was reaching the seats. I moved over to right field, but on  the field level. While I was there, everybody was hitting homers up to the bleachers. You can tell because the Dodgers player in right, is looking up at the bleachers: 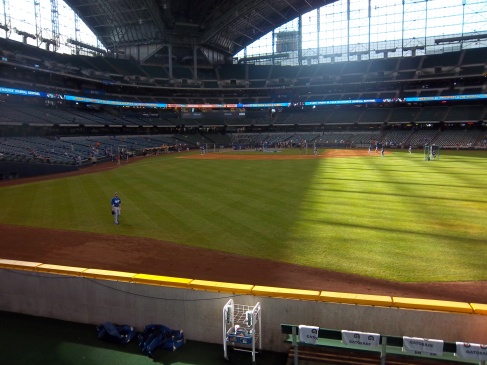 I decided to head up to the bleachers above me. on the way, a homer reached the concourse behind me, slamming off the staircase. I just missed it narrowly, and it was becoming one of those days where luck wasn’t on my side. Once I got to the bleachers, here was my competition:

Not too bad. Of course, nothing came up there either. It was one of those days. I did, however, get Paco Rodriguez:

…to throw me my first ball of the day. It was also my 25th straight MLB game with a ball. It felt good to get Miller Park on the board, since I didn’t know when I’d be back. I took one last photo of the view from where I was:

very nice. I quickly ran around to here: 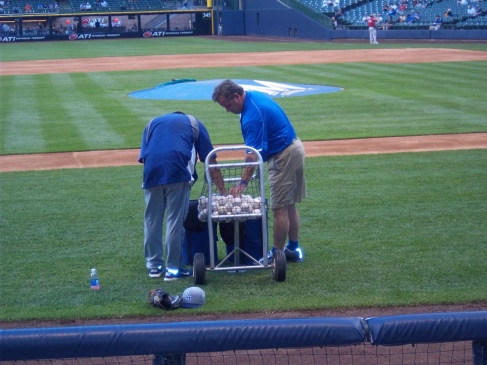 …and got ignored by the two guys there. It might’ve helped if I knew their names. It was time to tour the inside of the ballpark: 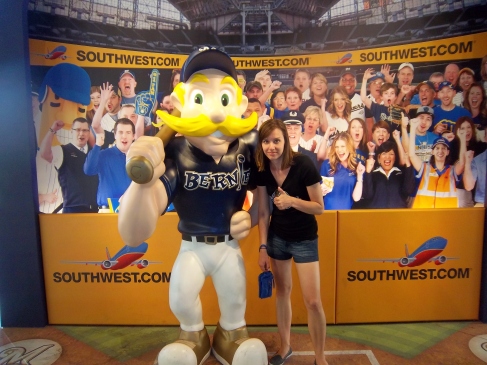 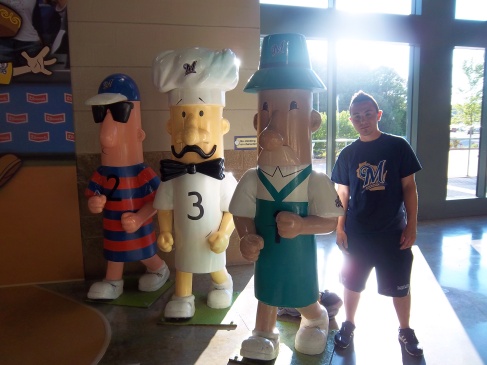 and eventually, we got to the top. I couldn’t believe the trip was a success: 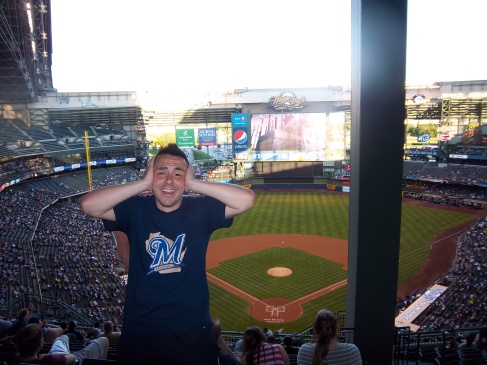 It was a nice view though, and I figured I’d take a nice picture: 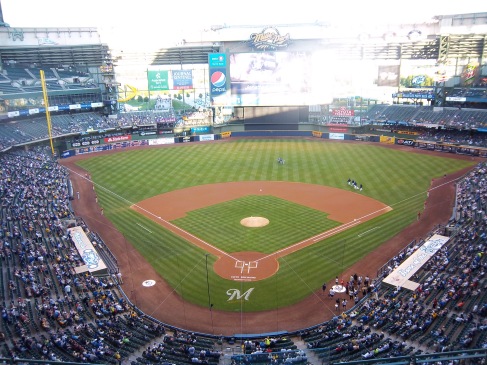 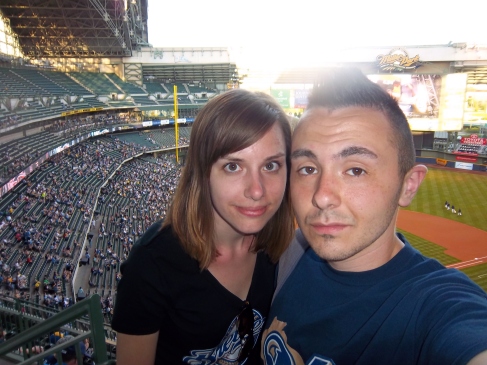 We kept walking to the furthest point of the park, where as you can see, it was oh-so-crowded: 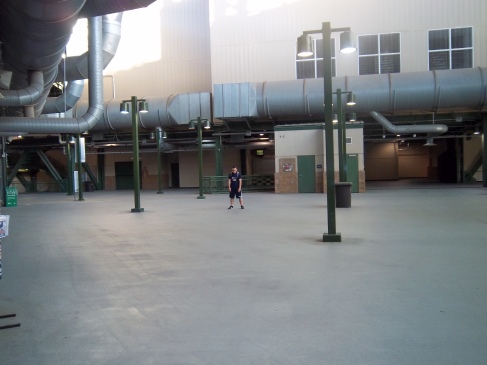 That’s me, hanging out with all of my friends. We got some funny looks, but I didn’t care because honestly, I have no idea if or when I’ll ever be in Wisconsin again. I like this picture I took from the top corner in right:

and to my right was the Mountain Dew Deck: 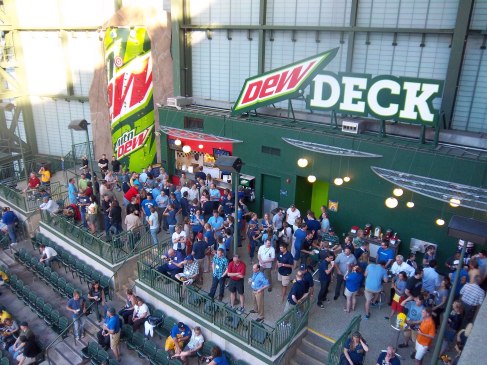 …which I didn’t really feel like going to. It’s similar to the bullpen bar at US Cellular, where you need to be 21 and hang out there, etc. Only difference is that this one isn’t on the warning track, this is about 600 feet from home plate.

I made my way back around to the bleachers, since it was empty:

… and I had faint hopes to catch a home run: 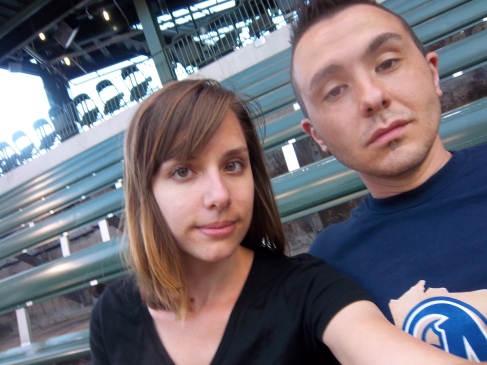 We hung out there for a few innings until a group of guys who for lack of a better word, were “bros” sat behind us and were annoying so we headed to our seats. Although I didn’t forget to snap a photo of this guy:

Look at those pants! Also, there is some cool architecture at Miller Park. Check it out:

You won’t see THAT at Yankee Stadium. Our seats were pretty good, I took advantage of a summer sale the Brewers were having, so they were only twenty bucks! It was time for the sausage race:

I’m not sure who won, maybe it was the chorizo. From our seats, I could see Nori Aoki would throw his warm up ball for every inning into the crowd.Here I am trying to go for one:

I did not get one. The game was about to end , so I ran over to here:

When the usher wasn’t looking, I snuck down quick and blended in with the crowd. To save you some time, this is where I wound up:

… I failed to get any other balls for the light. Lame sauce. But it was a fun time. Here I am with my stadium sign shot:

and one with Natalie  for fun:

It was on to Chicago the next day for our twenty-four hour train ride back to New York. Peace out, Wisconsin!